IOG launches a toolkit for developing custom sidechains on Cardano 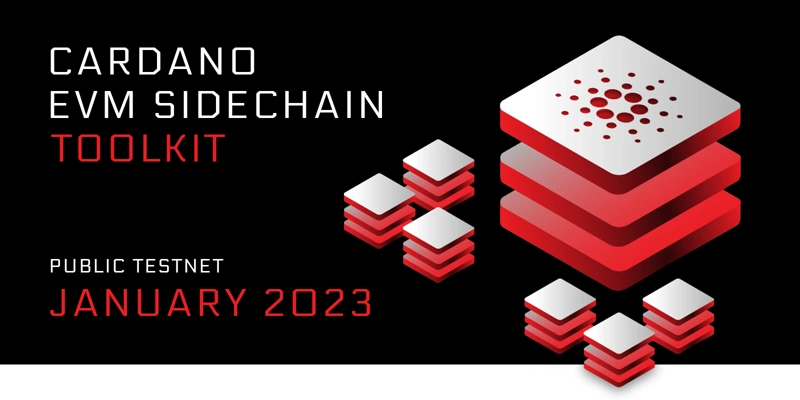 The Sidechain toolkit is designed to be user-friendly and easy to use, making it accessible to developers of all skill levels. It includes a set of pre-built templates that can be customized to suit the needs of the developer, as well as a set of tools for deploying and managing the sidechain. Additionally, the toolkit includes a set of smart contracts that can be used to govern the sidechain, including the ability to set up and manage a sidechain’s own native token.

The launch of the Sidechain toolkit is expected to further increase the adoption and usage of the Cardano network, and provide developers with a powerful new tool for building and deploying decentralized applications. IOG has been working on the toolkit for months and is excited to finally be able to release it to the public.

On the evening between January 21 & January 22 (between block 8300569 and 8300570), the Cardano network experienced a minor incident that temporarily affected a portion of the nodes causing them to disconnect and restart… 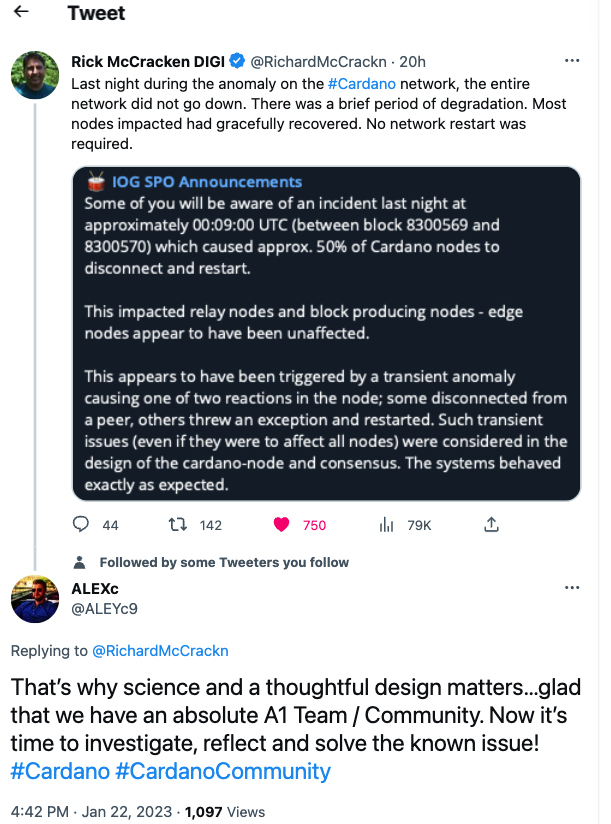 The incident was caused by a transient anomaly. Such transient issues (even if they were to affect all nodes) were considered in the design of the cardano-node and Ouroboros consensus mechanism. Thus proofingthe network behaved exactly as expected in this situation.

Block production was briefly affected when a part of the network temporarily lost synchronization, which can be seen on this link Block 8300569 - Cardanoscan. However, the impact was minimal, similar to normal delays that occur during operations and often seen at the end of an epoch. Most nodes were able to recover automatically depending on their SPO deployment.

IOG confirmed that investigations about the causes of the incident are still going on and once concluded will be shared with the community. 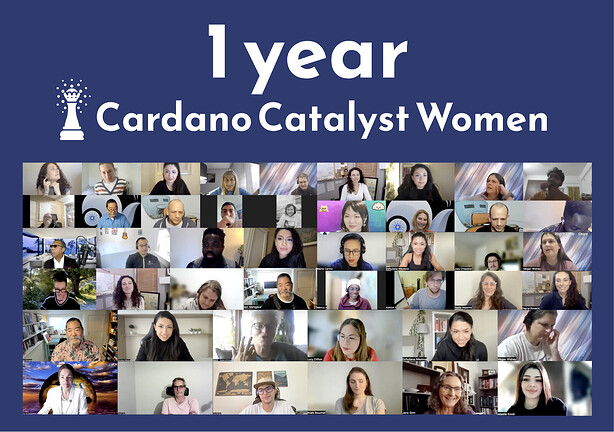 One year ago, the Cardano Catalyst Women group was formed with the goal of increasing the representation of women in the Cardano ecosystem through mentorship. The group aims to optimize the differences between men and women in collaboration ecosystems, in order to foster empathy, personal development, communication, confidence, leadership, and teamwork.

The group creates an inclusive space where everyone is heard and nurtures new ideas, builds trusted relationships, and provides pathways into Catalyst. In the last three months, the group has held online meetings called “Women in Blockchain” to bring together women from around the world interested in the topic, but with less or no knowledge about Cardano. The group is currently discussing ways to bring more awareness and share their trusted conversations with a broader audience.

Celebrating 1 Year of Cardano Catalyst Women [CCW-1YEAR] Exactly 1 year ago, we had our first meeting at the Catalyst After Townhall Breakout room with a focus on bringing more women to the Cardano ecosystem through mentorship. Why did we start this group? When the subtle but powerful differences between males and females are celebrated and optimized in collaboration ecosystems thrive, empathy soars, and personal development grows. Communication, confidence, leadership, and teamwork are max…

The DripDropz team has successfully open-sourced their on-chain voting system, in line with the announcement made last August to open source their Open-Sourced Voting Infrastructure. By open-sourcing their code, the team aims to achieve a high level of public auditability / formal Pear Review. 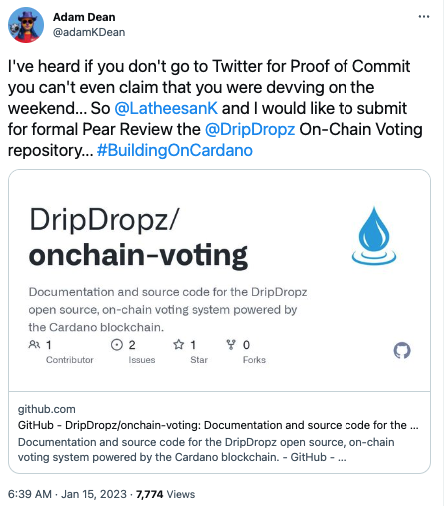 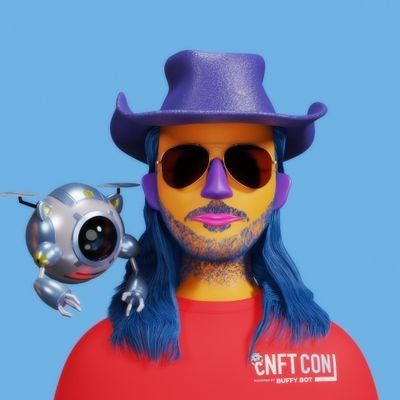 @adamKDean
I've heard if you don't go to Twitter for Proof of Commit you can't even claim that you were devving on the weekend... So @LatheesanK and I would like to submit for formal Pear Review the @DripDropz On-Chain Voting repository... #BuildingOnCardano github.com/DripDropz/onch…

During this engaging and enlightening discussion, Marlon hunted through Charles’ perspectives on the blockchain and cryptocurrency realm, as well as his origins as a Bitcoin teacher. Source

Project Catalyst by the Numbers

Project Catalyst is described as an “experiment” with aspirations to make big, impactful discoveries. If the experiment works, we will learn what we need to move into Cardano’s Voltaire era with the knowledge and ability to execute decentralized global governance in a way that might really change history. To that end, Project Catalyst touts many of the trappings of a good experiment: some constants, some variables, a global “lab” of eager scientists, and lots of repetition. What seems to be missing is arguably what lies at the heart of useful experimentation: clear analysis of the resulting data. There are various reasons for this which we won’t delve into now, except that the very nature of the experiment - decentralization - is at least partly to blame. All we can do for now is try to be part of the solution.

Here is a look at some data results from the first nine rounds of the experiment.

A good place to start a tour of Project Catalyst Data is to look at how the overall budget has grown over the first two years of the experiment. Fund 1 was run on “monopoly money” and pure excitement. Fund 2 opened up the treasury with $250K on the table. Then the pot doubled every round - six times in a row, reaching $16M in just six more rounds. This rapid growth was successful in stirring up lots of interest and excitement in the existing community and attracting new participants to Cardano. 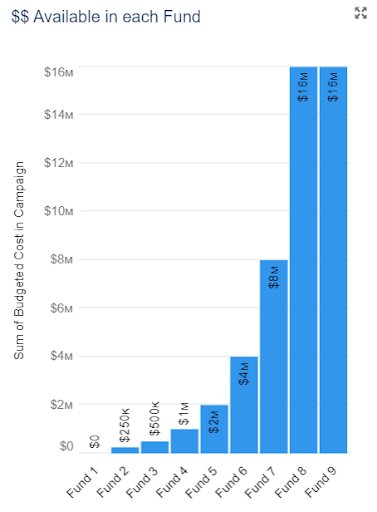 As anyone who has been challenged by the “Grain of rice” fable knows, indefinite doubling is not actually sustainable. Project Catalyst turned this corner at Fund 9 when the budget stayed stable at $16M. At this point, we expect this budget stabilization to last for the next foreseeable rounds as we turn our attention to helping the experiment to mature in other dimensions.

So did the growing fund attract growing numbers of proposals? It sure did! Traction was slow through Fund 5, with Catalyst struggling to attract even a couple hundred proposals - even with $2M on the table. However, a couple months later it was a totally different story: Proposal numbers tripled in Fund 6. Healthy growth continued in the Funds that followed. We see a similar growth pattern when we look at the dollar values of proposals submitted across the funds so far, but in the most recent, Fund 9, there is a noticeable shift. The VALUE of all proposals made a 30% jump, from ~$50M to ~$75M, while the NUMBER of proposals submitted only increased by a small notch, from ~1050 to ~1100. This means that while the number of proposals stayed essentially stable, each proposal’s budget went up a lot on average. The factors driving this increase in budget size are likely numerous.

In some cases, returning proposers had learned from experience that they were lowballing themselves - proposing modest budgets to increase their chances of winning. This can work as a way to get a foot in the door, but with some experience under their belts, proposers see the need to actually budget for a sustainable wage. Hopefully, another reason for the bigger budgets is that the community is growing some big dreams! The capabilities of the Cardano network have grown significantly over two years; what’s more, tool builders are now able to build off each other’s work and ideas. Each innovation and open-source contribution inspires the next.

What about those downvotes?

One more thing that simply cannot be ignored in these overview graphs is the bright blue-green-red evolution in voting and funding. Green represents projects that were funded - by dollar value, by the number of projects, and by percent of the whole. Blue represents projects that were approved by voters but were over budget in their category and therefore did not get funded. Red represents projects that received more “No” votes than “Yes” votes (or, to be strictly accurate, less than 15% more Yeses than Nos) and were therefore “not approved” and were not eligible for funding. We can see that in the early rounds of Catalyst, the power of the “No” vote was used with some vigor. In rounds 4 and 5, half of the proposals were not approved; those who were there might attest that there were a lot of questionable proposals in the early rounds. However, in rounds 6-7-8, there was a steady shift in a different direction. Proposals in each round received more and more voter approval until, in Fund 8, roughly 80% of proposals were approved by voters - both in terms of the number and value of proposals. With approvals so high, getting funded was simply a matter of who got the MOST approval and fit into the budget. Funded proposals totaled 367, while 481 approved proposals were left out in the “over budget” club. 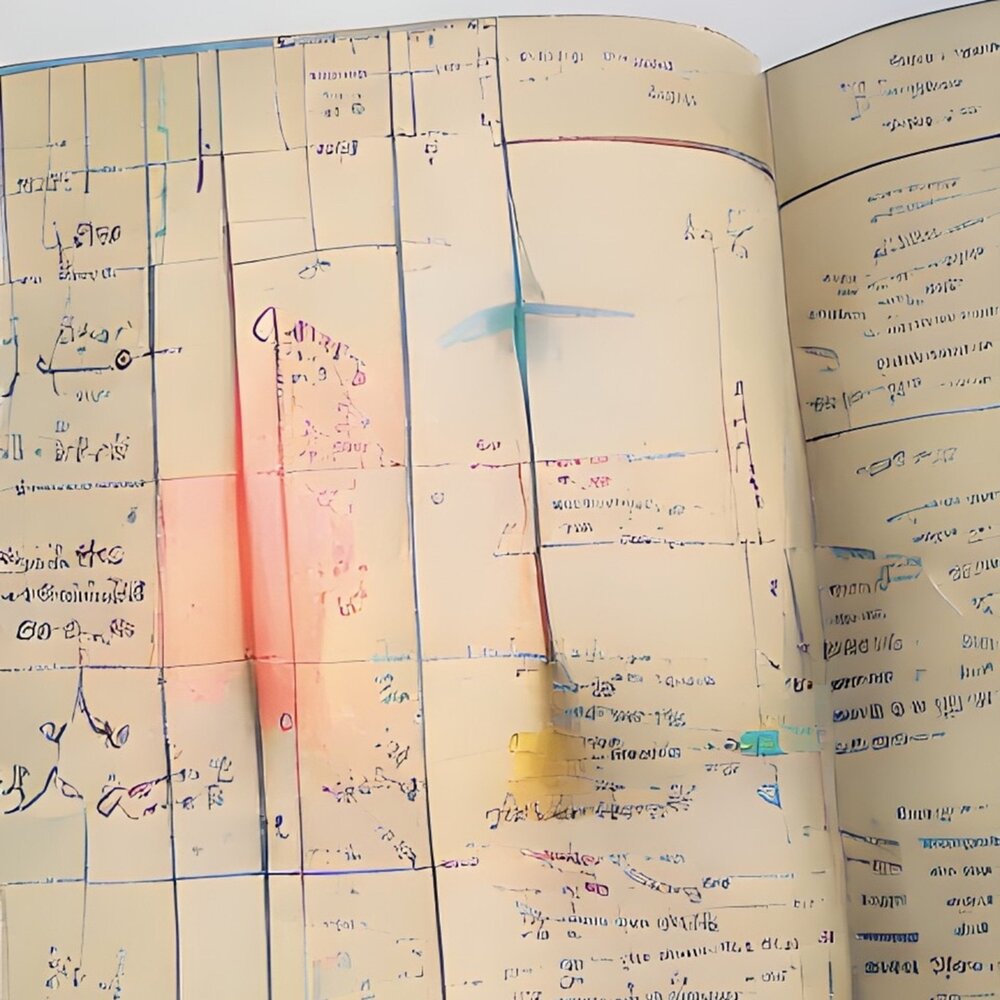 Project Catalyst by the Numbers 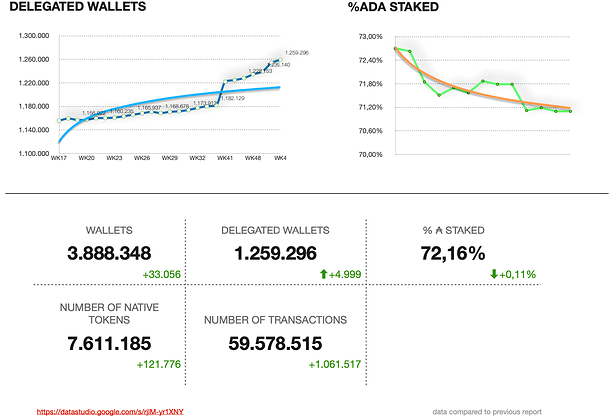 Cardano, a decentralised Proof-of-Stake (PoS) blockchain, experienced a network outage, according to information from its creators’ Telegram channel. According to a tweet by Rick McCracken, the blackout was a brief one.

He tweeted – “Last night during the anomaly on the #Cardano network, the entire network did not go down. There was a brief period of degradation. Most nodes impacted had gracefully recovered. No network restart was required.”

The Cardano developer continued, pointing out that while the nodes were affected, the Cardano network as a whole was spared. On the blockchain, the nodes are known to guarantee smooth transactions. Tom Stokes, the manager of Cardano’s stake pool, pointed out that more over 50% of its nodes were impacted at the time.

Cardano Receives Improvement Proposal
As of the start of 2023, Cardano (ADA) has seen significant growth. This can be attributed to the ongoing development and advancements of its network, as well as anticipation for upcoming launches that are expected to enhance the capabilities of its smart contract platform, positioning it as an “Ethereum killer.”

A steady incline in prominence is imperative for Cardano, as the results will eventually reflect on ADA’s price. In such an optimistic scenario, we expect the ADA price to reach as high as $0.716.
Reference - Coinpedia and Twitter