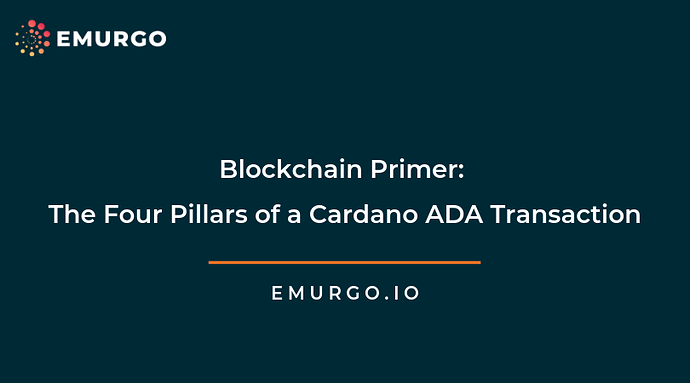 Transactions are a cornerstone to our daily lives. On a daily basis, we transact to pay for our groceries, to send money, to finance assets and much more. Cardano, the first third-generation blockchain to evolve from a scientific philosophy, allows users to make transactions globally using its native cryptocurrency, ADA. There are four pillars on which a Cardano ADA transaction is built.

In this blog post, we will look at these four pillars specifically within the context of Cardano ADA.

The first pillar of a Cardano ADA transaction are the assets involved. An asset is something of value that a person owns. For a craftsman, their assets would be their skills and expertise. A person who owns a piece of land also owns an asset. In our daily lives, these assets are often traded for a common currency, which also has value. ADA is an asset that lives on the Cardano blockchain. This has value for users utilizing the Cardano blockchain and can be exchanged for goods and services. This is the first pillar on which the Cardano ADA transaction is founded.

Earlier in April 2019, EMURGO announced the development of Seiza - a new feature rich Cardano blockchain explorer - that was subsequently launched for public usage in May 2019. Seiza allows users to track their ADA transactions and other vital information related to the Cardano blockchain including wallet histories, addresses, block size, and stake pools, among others. This essential Cardano ADA product will become increasingly important as Cardano moves toward full decentralization with staking, stake pools, and increased ADA liquidity with the Shelley era.

The next pillar that a transaction is built on is the people involved. Knowing who you’ll send an asset to is a key component for exchanging value. Regardless of the type of transaction you want to make, this is a key pillar. You don’t want to pay a barista who isn’t making your morning coffee. You want to pay the person who is actually putting together the drink.