The current parameters overvalue the disincentive (minPoolCost), which in turn devalues the incentive (pledge) to the end user. By tuning some parameters we can balance the two so they begin working together.

minPoolCost: The mandatory fixed fee imposed on all delegators currently set at 340 ADA/epoch/pool. It’s important to note ‘the [minPoolCost] parameter is not part of the original reward sharing scheme’ and has not been simulated. The last two years have been the test of its function and effectiveness. By comparing real world stake distribution with the simulated distribution from {ref.2} we can see its effects on the network.

tipping_point: This is the point on the plotted reward function where the slope of the tangent is equal to 2.5x10^-10. Tipping_point is the amount of stake required to make a pool begin to offer favorable rewards, and also represents the minimum pledge required to balance the incentive of pledge with the disincentive of minPoolCost. With current parameters this is equal to 10M ADA. Shown as the junction of red and black {fig.1}

danger_zone: The danger_zone is the part of the plotted reward function who’s tangent slope is less than 2.5x10^-10. Danger_zone represents the total pool stake the minPoolCost disincentivizes against by offering relatively low rewards. The danger_zone is shown in red and more favorable rewards are in black {fig.1}.

sybille attack - an attacker with low stake tries to gain a majority of stake by creating lots of pools with low cost.

The minPoolCost apparently provides sybille protection by making a pool with low stake unattractive. A pool operator can make the pool more attractive by adding stake of their own as pledge to exceed the tipping_point; or, instead of pledging, the operator can campaign for stake delegation.

The tipping_point is currently out of reach of 99.9% of all public pools’ pledge, making campaigning the basis for stake distribution. This centralizes stake with operators that are effective at campaigning but do not necessarily have any stake in the system of their own. Coincidentally, the parameter meant to increase sybille protection can have the opposite effect if its value is set too high.

“Our game theoretic analysis has shown that if stakeholders try to maximize their rewards in a “short-sighted” (myopic) way (pool members joining the pool with the highest rewards at this moment[…]), chaotic behaviour will ensue.” {ref.1}

Delegators are more likely to stake with a pledge-less high total stake pool than a high pledged low stake pool despite the latter providing higher non-myopic rewards. This illustrates the imbalance of the incentive (pledge) and the disincentive (minPoolCost).

A sybille attacker should need stake in the system to compete for delegation, not a rigorous marketing campaign.

Pledge benefit incentivizes operators to consolidate their pledge to receive higher reward on their stake and also makes their pool more attractive; pledge benefit incentivizes delegators to lower operator leverage by hunting for the best rewarding pool. Pledge-less pools hit a reward ceiling and are unable to compete with higher pledged pools, making them less attractive.

Presently, pledge has a rather weak reputation, with many people believing that it’s not effective or noticeable enough. Currently, only 21 public pools can offset a meager 1% margin with their pledge. There is a large gap between public pledge and saturation, with the majority of pledge benefit noticed within that gap. Only a few private corporations, IOG included, are benefiting from high pledge rewards {fig.2}. We need to bring pledge benefit to within our real set of pools.

Raising a0 will make pledge benefit more noticeable, but this would mostly benefit the small handful of corporations that have pledged to saturation and would only barely effect the majority. It would not change the gap between the founders and everybody else. We need a change that will benefit the most people.

The solutions in this CIP will solve all of the above mentioned problems. It will exponentially benefit more people/entities than in will detriment.

Earlier proposed changes of K to 750 or 1000 are far too small. We would still have a tremendous gap between real public pledge and saturation (between the rich founders and everybody else). Raising K by four times its present value will make pledge four times more noticeable and bridge the mentioned gap {fig.3}. Pledge only being somewhat more noticeable won’t be enough to change pledge’s tarnished reputation. ‘Pledge is now 4x more effective’ in an article headline and YouTube title will grab the layperson’s attention. It will change the narrative from ‘pledge has no value’ to ‘pledge is preferred’. This will all be done while decreasing the rewards paid to saturated pools.

Making pledge more effective could also help solve the problem of exchanges, despite having no stake of their own, making >20% of the blocks. BNP is simply being greedy with their stake. It is more profitable to run their own pledge-less pools than to pay a fee to an SPO. Only a few public pools currently offer greater than baseline rewards, thanks to the imbalance mentioned above. If more pools could offer greater than baseline rewards, exchanges like Binance and Coinbase could choose to make more ADA by delegating to community pools.

At all times we need to incentivize decentralization!

Raising K will force a shakeup of the current stake distribution, which is quite centralized at the moment. Many delegators will be forced to revaluate their pool choice, hopefully for the better.

Scheduling the shakeup in conjunction with pledge becoming more effective opens a great opportunity to reeducate the population of delegators on how the reward function works and what effects parameters have on their reward rates.

This is not so much a change as a tuning of the originally applied incentive/disincentive scheme. The simulations from the original RSS paper show there is no danger of lowering the minPoolCost too low, so long as pledge is ‘meaningful’ within our real set of pools.

These changes will lower the reward rate of the pledge saturated pools while increasing rewards for all delegators. Pool operators will be able to set their own prices more in line with their actual cost of running the pool. Saturation point will be reduced from ~69M to ~17M. Pledge will become four times more effective at incentivizing decentralized stake delegation.

This proposed change is fully backwards compatible and will not require a hard-fork. Adjusting parameters is ‘easy’ and will require no code rewrites. This change can be implemented immediately.

All graphs were generated using data through epoch 353. 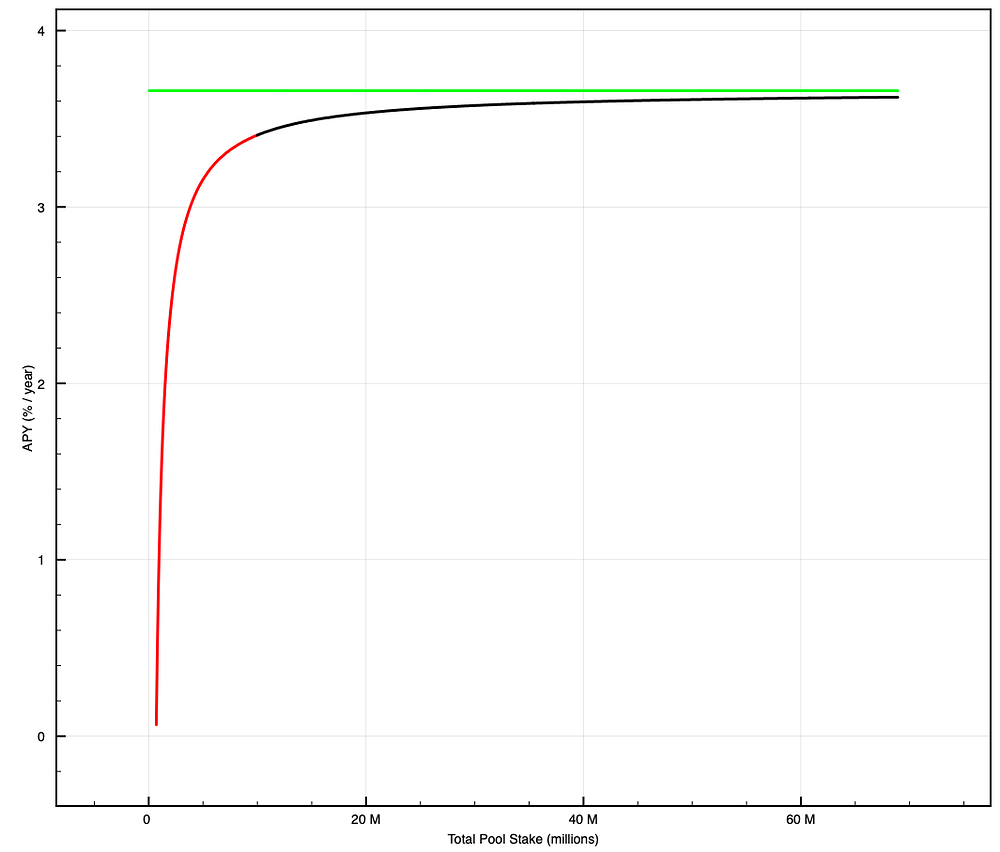 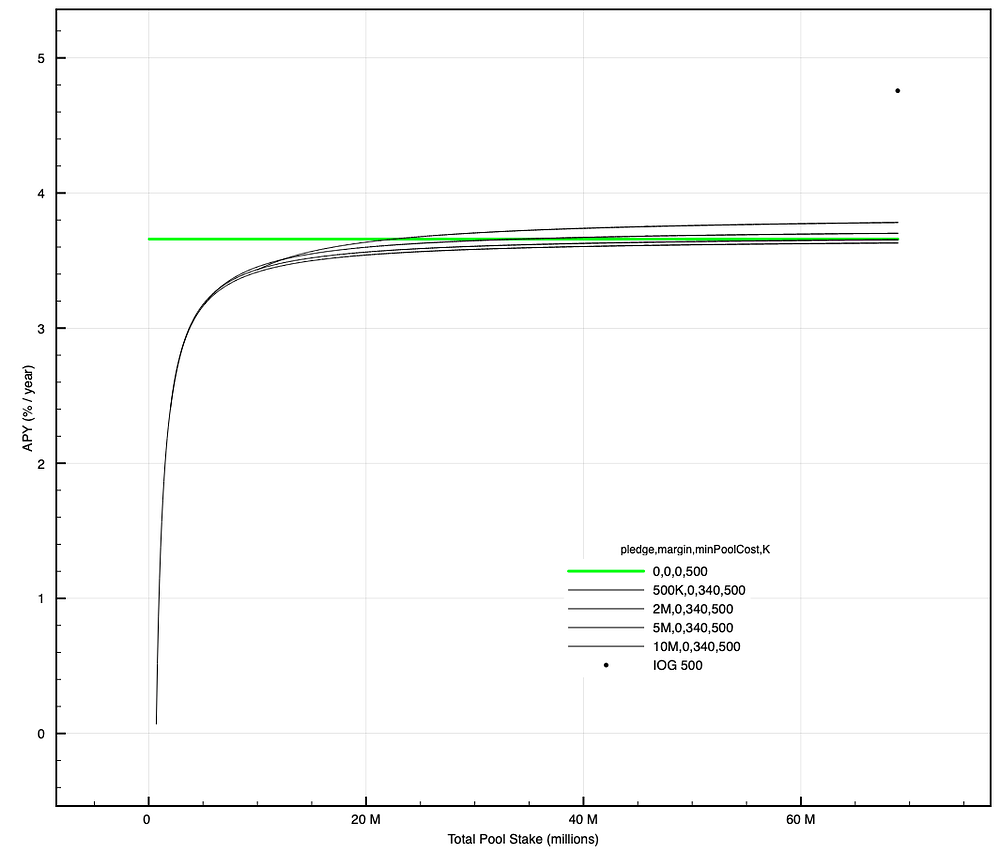 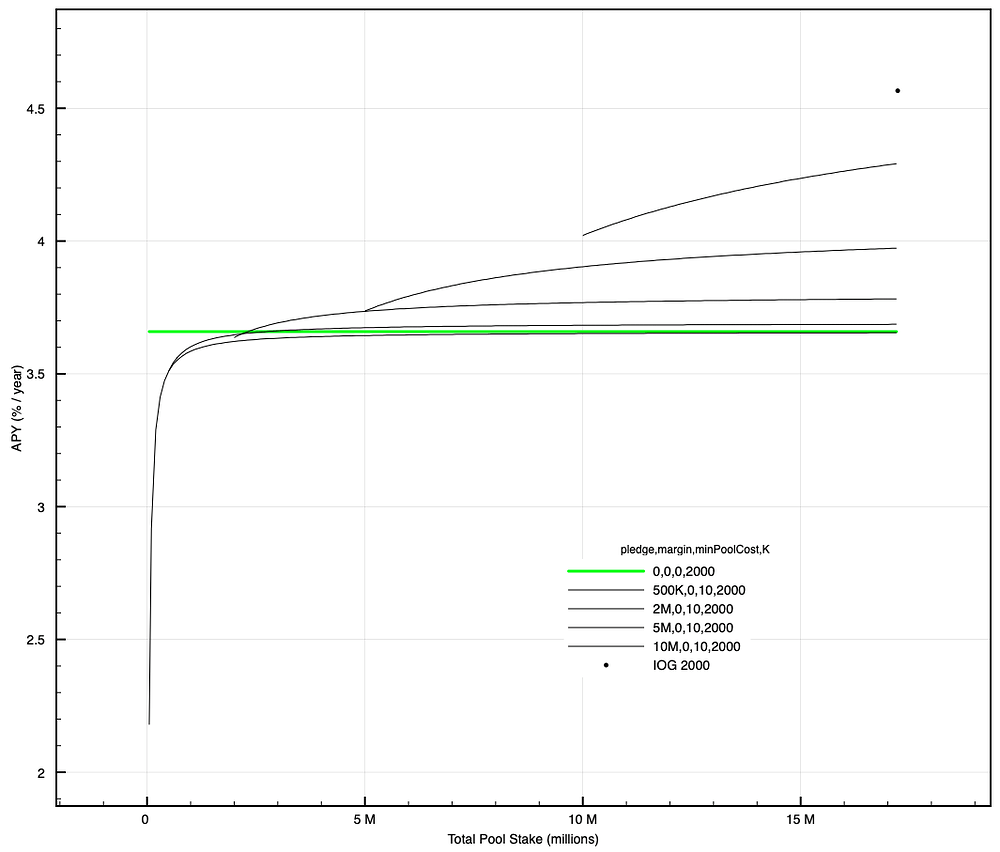 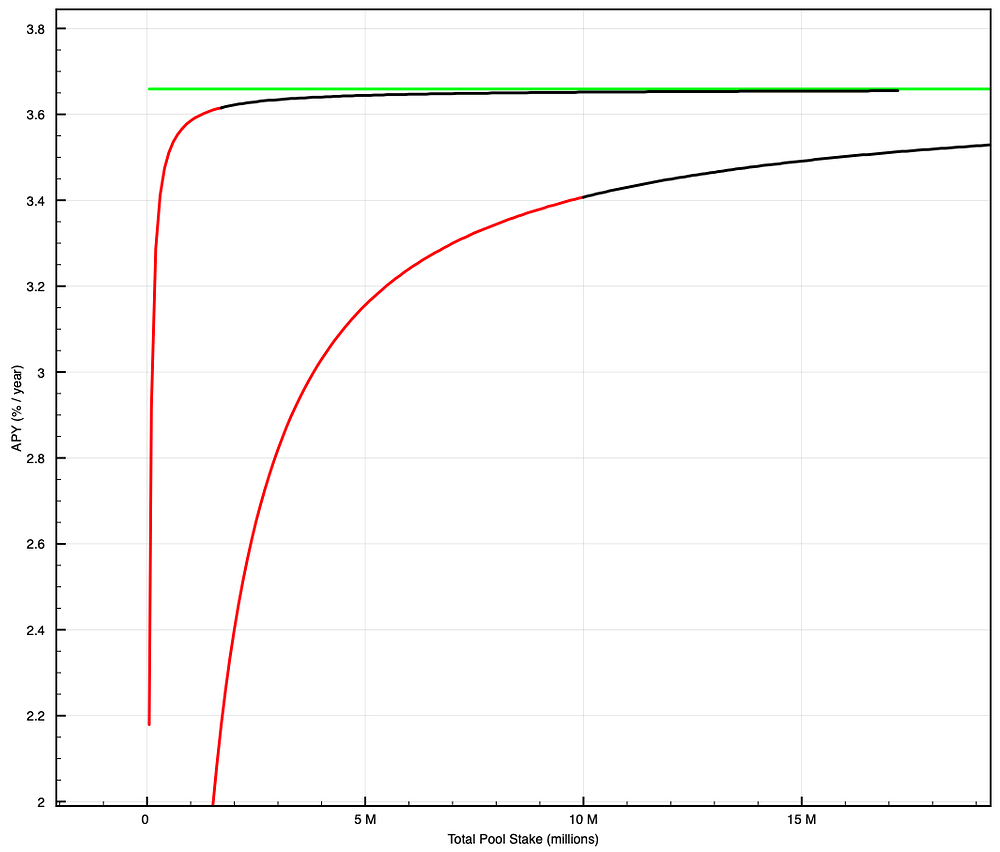 @ADARobinHood the lead designer of the original stake pool incentive scheme and/or reward formula is going to be on this upcoming discord call (from July SPO Digest):

Your invitation to the August SPO call is here! In this month’s call we’ll have Professor Aggelos Kiayis, IOG’s Chief Scientist, join us to share more on his latest research, which compares alternative reward sharing schemes for Cardano. … Thursday, August 4th at 3 p.m. UTC in Discord.

The discussion around the pending CIP-0050 has been adamant about increasing K not having any effect, mostly due to the behaviour of multi-pool operators, while all changes under consideration involve reducing or eliminating the minimum fixed fee.

You could tune in to these discussion threads, ongoing since April, to see how your proposal might fit into the deliberation so far (I believe your suggestions have already been under consideration here):

First, welcome @ADARobinHood ! I love seeing that your charts are so similar to mine and we share similar thought processes on the reward equation. As I spend more time looking at Cardano I become more convinced that an enforcement is necessary instead of an incentive with a zero or negative slope as stake increases. Long-term in an era of governance both the current minimum fee and a0 can be weaponized by the large against the small, crushing the robinhood spirit. k-parameter almost becomes irrelevant if a cardano-node modification allows for a single node instance to manage any number of block producing key sets.

I’m about to revise all the charts in CIP-50 but this is a sneak peek: 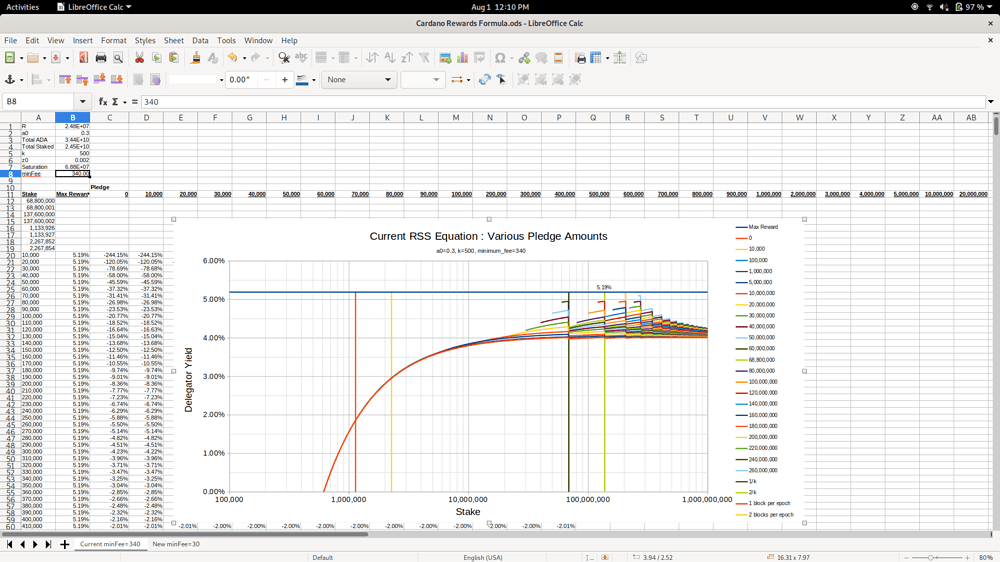 Welcome to the CIP-50 hivemind??