So anybody knows how, and more importantly when we can put this to a vote?
I don’t see hwy we couldn’t make it one of the early votes, but we’ll need time in advance to prepare and campaign.

Here is a suggestion for the motto of this thread anyway, summarized so concisely by @johnshearing :

"Give us a privacy option.
Give us a full transparency option too."

Just bringing it back slightly, original argument presented by @philpa was that of the pledge amount being public, which I say should be a choice for the operator whether or not to disclose.

This thread has slightly mutated into a whole host of topics of privacy, so we need to decide which part of the eco system are we focused on.

Correct me if I’m wrong here people, but I would like someone to start designing the whole thing, so we can decide on the principals together early on.

Regarding the original suggestion by @philpa, I’m undecided on that.
But of course, that’s something that can also be put to a vote in itself.

Good point well made, i think one of the other issues (especially for big bag holders) criminals could target someone with large assets,

Thanks @MachTwo, That’s the big question: How to we build Cardano such that our wealthy citizens do not need to hide in order to be safe? If we can figure this one out then we can all enjoy the benefits of transparency which is a world without large scale corruption.

There are several things we can build into a Cardano lightchain that will make ADA more valuable to it’s community while making it worthless to criminals.

There are many more ways to approach this problem but they all require transparency because if criminals don’t understand who owns holdings in lightchains or hardened smart contracts then they may mistake the holder for an easy victim. So transparency is now security. That was not the case in the days before smart money. The world has changed. Secrecy is no longer a protection. Worse, secrecy is the habitat were corruption thrives. Still there are times when citizens, corporations, and government must be able to spend in secret so it must be an option even though secrecy generally makes the world poorer and more miserable.

Just bringing it back slightly, original argument presented by @philpa was that of the pledge amount being public, which I say should be a choice for the operator whether or not to disclose.

This thread has slightly mutated into a whole host of topics of privacy, so we need to decide which part of the eco system are we focused on.

Hi @Trigger, Yes that was brought up as a major concern but he did say that he was addressing those not concerned as much about privacy and he also addressed secrecy regarding taxes and about other people knowing his business in general. He introduced a wide range of topics.

Concerning the focus of our conversation, we must consider who is affected by what we talked about and our responsibilities to them. The people affected are our children because these are the people who will have to live with whatever we decide to build today. Together we must discuss as much as we can during this early stage of development so that we leave our children with something that will make their lives better and not worse.

I am so grateful to have this opportunity to hear your concerns and to tell you about mine.

Thanks for your input John, great points raised and interesting to see so many ways the privacy issue could be resolved. If we could put Multisig, limit transactions etc. with a simple on/off switch within the wallets each person could then set their own security/privacy and at the same time it gives us an opportunity to educate the user.
Probably like most things in life it will be our ability to adapt that will be the solution not the individual solution itself

Excellent point @philpa !
Privacy is very very important. Many times i like to send tip to people but i dont since i dont want them to see what i have in my wallet so i usually ask if they accept Monero or Zcoin which usually isnt the case.
Not that i have so much or anything but still i dont like others to know what i have.
As long as we dont have privacy we dont have fungibility.
I hope Charles and team add privacy in the map so we can have a target date, tech and can follow up on progress.

Hi @vampyren,
Perhaps structure may already be in place to tip in ADA with out exposing knowledge of your wealth.
If I am thinking correctly, you could open an account with one of many exchanges that accept ADA.
You would wire money from a regular bank to that exchange.
This would be your tipping account.
Then tip whomever you want without exposing your wealth and without fear of breaking any tax law.

I understand this is not what you asked for and it’s not what you want.
You want the ability to spend privately from any Cardano account.
But if I am thinking clearly, this method hides your wealth, your identity, and keeps you within the boundaries of tax law without the need to do any reporting.

Is this a workable solution at least in the short term?

Privacy does not matter for privacy’s sake. Privacy only matters in so much that we are able to own our data, and put it to work on our terms.

Privacy is an aspect of data ownership, but should not be the end goal.

Privacy on its own cannot last, because the incentive to nonconsensually remove another’s privacy will remain. The only way to remove that incentive, is if we own our data.

If we own our data, spending resources to take someone else’s data will act as an attack on ourselves, as we ignore the state of our own data in favor of someone else’s.

Don’t quote me on this, but I think I recall from one of Charles early ama’s that they do consider privacy important. They think very carefully about this controversial topic, and like every other feature, they research it extensively. They took a strategic decision not to implement privacy early on, because it could slow down adoption, and make Cardano a target for regulators. Once cardano has achieved mass adoption and other features like smart contracts and decentralized governance are implemented, it will be relatively simple to implement privacy features. They are trying to avoid Cardano being lumped into the privacy coin debates and becoming like Monero, with many people thinking it is just a tool for criminals, drug dealers, tax avoidance, and governments like North Korea to avoid US sanctions. By strategically avoiding the most controversial features early on, they can accelerate mass adoption and gain favor with regulators. And once the size of the network is big enough to have political influence, regulation will be done internally and on chain, and not so much from outside governments. Personally I think it makes sense for privacy features to be voted on through voltaire governance.

Ok to revive this ageing thread?

Interesting topic that I’d love to hear more about. I’ll be back when I have more time…
… but in the meantime…

Charles talks a bit about privacy at the end of the first Cardano Live podcast. I don’t have a timestamp, but it was in the last third, in and around taxes… etc.

Starting at 39:00 what he says makes alot of sense to me… he’s a libertarian, but understands the necessity for good governance and some regulation when it’s for the greater good.

I felt the same. It’s easy to fall hard one one side or the other… to the detriment of the system. Gotta find that middle way.

Complete privacy leads to the complete breakdown of government, as they (we, you, government) can’t control taxes, funding, or anything… but we can create a better system of governance, as we are experimenting with transaction fees going to the treasury and catalyst/voltaire

We also get some assurance that everyone else is not cheating the system, and can avoid the feeling that honest taxpayers are a minority funding society for all the psychopaths who hide their income and don’t pay the taxes they should be paying.

With Cardano Voltaire governance, Taxation can be gamified and turned into something fun and rewarding, instead of a dreaded activity where you’re punished if you make a mistake. 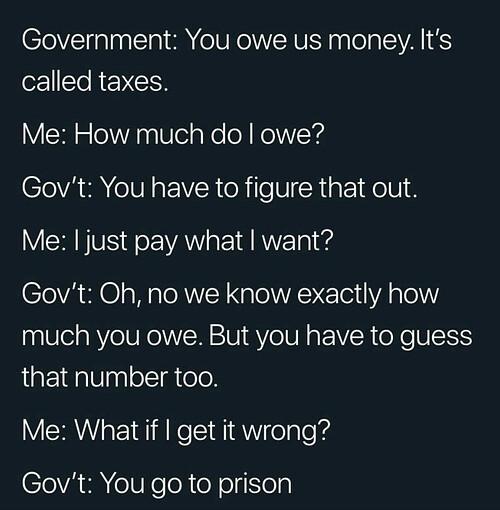 Eventually, maybe… the Cardano foundation will have our own black helicopters lol

I hope we can get some privacy as well. I find it hard to believe that anyone will adopt ADA for daily spending transactions if they are also Staking. Your staking balance and all receiving addresses with ADA amounts are publicly visible.

There is certainly room for improvement

Oh my. Love this little scenario…er… I mean I love the accuracy in which it captures… a horrible scenario.

Nothing worse than a fundamental system that is riddled with exceptions.