Welcome to the fifth journal of our “Ambassador Stories”!

Every week, you’ll be able to enjoy the various, unique stories of our Cardano Community Ambassadors: what motivated, and still motivates them, to be part of this amazing and wonderful community?

The Cardano Community Team would also like to thank the Ambassadors for all their continued efforts and participation in sharing their stories with us.

Please read all about Tyrone (@Berry3k) & Marcus (@marcusoregano) down below!

Tyone has been with the Cardano family for quite some time now, creating content and videos for the ecosystem. He is currently busy working on more videos he’ll be releasing as a series! We’re looking forward to seeing more videos soon! 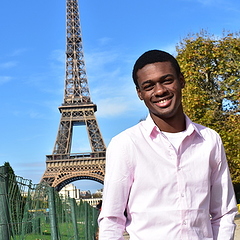 (Tyron during his travels to Paris.)

1) Tell us a little about yourself. What is your background?

I’m 23 years old and Ft. Lauderdale, Fl is where I call “home”. I’m a full-time student at Colorado Technical University online, and I currently serve in the US Air Force. I’m in lieu of my BS in Computer Science for Software Engineering.

I run an E-Commerce Logistics company, enabling online merchants to utilize our transparent tracking and shipping services. I find joy in solving problems and minimizing error. Running a business keeps me on my toes, because there are new challenges every day.

2) How did you get interested and involved with Blockchain/Crypto?

I was first introduced to Crypto in 2013 during my Jr. year of High School. A friend of mine told me about Bitcoin and the Dark Web and that was the end of my adventure into crypto. I later jumped back in, when Philippe (from the Cardamon Effect) showed me the ropes behind the technology of Blockchain and its potential. This was around May 2017. We’d have video chat meetings and do our own research on different projects.

After being introduced to Ethereum, it was not long after Philippe suggested I should read the Cardano Ouroboros white paper. After reading and watching a few of Charle’s Youtube videos, I was convinced that IOHK was onto something. Their plan was bigger than just sending/receiving money and getting “rich”. I saw their vision to solve real-world problems.

4) How are you contributing to the Cardano Ecosystem as an Ambassador?

I first started out making Youtube videos to help educate the US Military community on customs and living experiences. After 2017, I decided to rebrand my content into Crypto. Later then decided to post Cardano-related content, and was chosen as one of the first Cardano Ambassadors.

I’m also in the works of making a list of videos and tutorials to help people understand the technology behind Cardano, help outside developers create and build onto the Cardano platform, and contribute to the Cardano developer community.

5) What is your future vision for the Cardano Ecosystem?

My vision for the future of the Cardano Ecosystem is a bright one. I believe Cardano will fill the cracks that it’s predecessors have failed to. Adoption will grow, and users will be able to enjoy a secure, seamless computing platform with high scalability.

6 ) What is your personal message to the Cardano community?

Centralized banking is the Stone Age. ALWAYS DO YOUR OWN RESEARCH.

Other than that, I hope to attend a community event and meet you all one day

Marcus is also one of our much appreciated long-term community members! He has done great contributions in spreading the Cardano lovelaces in Brazil! A great help and Cardano evangelist, indeed!

(Marcus, in Dexter T-shirt, with other blockchain enthusiasts at an event called ‘Colaboramerica’

1) Tell us a little about yourself. What is your background?

My name is Marcus Vinícius, I’m from Rio de Janeiro, Brazil. I work with finance and with one-to-one Physics classes to make some extra money. I have a cat named Xandica and my hobby is photography.

After elementary school, I worked for a few years with one-to-one Physics classes on my own, as I found the subject interesting. With this experience I was able to be selected for Physics classes in a great preparatory course in Rio de Janeiro called “pH”, where I’ve worked for about 1 year. But I did not have a higher education degree and felt that I did not have many growth prospects.

I’ve started a degree in Economics in 2010. Since then, I have changed my professional profile, graduated and worked with finance in sectors such as Consulting, Oil and Gas, Services and Finance.

2) How did you get interested and involved with Blockchain/Crypto?

I discovered Bitcoin in 2014, in Economic Sciences discussion groups. But I became more interested in 2016, when I was looking for options for offshore investments options. I’ve studied its technology and usability. I found it very interesting! From there on I decided to research further and I met alternative projects like Ethereum, Litecoin, etc. So I got to know the Cardano project, already at an early stage, in 2017.

The work with Physics taught me to value the scientific method and to have more parsimony with the “common sense”. This point caught my attention in the Cardano project. The philosophy of researching before implementing. Also the process of “Formal Specification & verification”. Another point was its community: I met and saw members with more down to earth, balanced and interesting ideas.

4) How are you contributing to the Cardano Ecosystem as an Ambassador?

I have participated in Blockchain events since 2018. Where I was able to meet a lot of nice people, which opened many doors for me. I created a Brazilian Public Group about Cardano on Telegram and today we have about 1,100 members (@ADABrasil). We had great help from the moderator Gean (@MrBrinker) and incentive from Niels (@Katsumoto). We also get help from content creators in Brazil like “Aprendizado Cripto” (@Chess).

I was able to participate in more than 50 events spreading the word of the project and performing 6 interventions (meetups, pitches, etc) about Cardano. I have also participated in interviews on some YouTube channels.

fdMqk4HG3JItnt7AEs-yQN4hrYteAB23mmHBDEvHtTHmlIAvoHV8xCmj4q-EUKlgcN6XKQJSr-3V5uPLXhj4_b9WNVwW7wuI45kH5XgML-jKN-0V6r0UJVUn7cLcNXA7e3AmXNme1280×752
(Marcus being interviewed during an event by Edilson Lauro from “Investimentos Digitais”, talking about Cardano!)

The Brazilian community I met was very fond of the Cardano project and wanted to get involved. We implemented ADA support in a 100% Brazilian multi-currency wallet called Cashu.

5) What is your future vision for the Cardano Ecosystem?

I think the Cardano project can be adopted as official Blockchain infrastructure in large projects. Because its network is proven to be safe, its academic philosophy and its great partnerships (Runtime Verification, Emurgo Academy India, etc). Exponential network effects can lead to mass adoption of the Cardano project technology.

Cardano must offer one of the best services in the industry. With greater degree of security and predictability.

6 ) What is your personal message to the Cardano community?

My message is to remain confident in the most careful method and scientific philosophy of the project. The Cardano project has one of the most organized workflows in the industry. In addition to a very active developer community. Keep track of the work of other ecosystem employees like Sebastien (@SebastienGllmt) and Ambassadors such as Philippe (@philpa)!

I also believe that it will not be necessary to force any convincing about the project nor to feed the Trolls by responding too much to FUD. The product, the method and the deliveries will convince. This project will enter into the history of Computing. Mark my words!

Such motivated community members we have in our ecosystem! Thank you all for reading, and don’t forget to leave your comments/likes and give our Ambassadors some Cardano community

Until next week, with new people and new Ambassador Stories!