Comparison of staking on Cardano and Ethereum

Some people stake on Cardano for almost a second year. Ethereum is transitioning from PoW to PoS and people are starting to get more interested in the differences between the two PoS networks. Let’s compare staking on Cardano and Ethereum.

How to perceive staking

Staking aims to combine the selfish economic interests of people with the needs of decentralized networks. Networks financially reward those who act in their interests. The network’s interest is first and foremost to be secure and decentralized. The network runs on hardware that someone has to maintain. Computer resources are needed to process transactions and smart contracts. However, these are not provided by a company but by interested volunteers.

Both Cardano and Ethereum networks are operated by block producers and allow people who do not operate their own hardware to participate in staking. This group is called delegates because they delegate their decision-making power to someone else in some way. In the Bitcoin network, this is also how it works. Pools are block producers to whom miners delegate the hash rate.

Like Bitcoin, the Cardano network operates with the concept of pools. In the case of Cardano, it is at the protocol level. The delegates group consists of stakers, people who delegate ADA coins to a chosen pool. Pool operators are responsible for producing blocks, and delegates decide which pools to trust. Pool operators can have their own stake (pledge), but this is not a requirement for pool registration. Pledge does increase the rewards for the pool and pools that have a larger pledge may be more attractive to delegates.

There are minimal requirements for delegates and anyone can literally delegate a few ADA coins from their own wallet. It is necessary to have 2 ADA as a refundable deposit and 0.17 ADA for the transaction fee. If you want to stake 1 ADA, you need to have 3.17 ADA. Choosing a pool for staking is a very easy process and every Cardano wallet allows it. Delegates can change the operator’s pool at any time, so operators are incentivized to behave fairly.

The operator needs to have 500 ADA as a refundable deposit to register the pool. At the time of writing, this is approximately $250 USD. The Cardano network places minimal financial requirements on pool operators and delegates. This differs from the Ethereum network, which requires 32 ETH to activate the validator software.

The need to have 32 ETH is a high barrier to entry, as at the time of writing this is approximately $55K. The barrier to entry can fall or rise due to the volatility of ETH, so if the price of ETH rises, there will be fewer and fewer people who can financially afford to be a validator. There is a risk that being a validator will be a business for the rich.

Ethereum offers other options to stake ETH. If a user has 32 ETH and does not want to run their own validator, they can use the staking-as-a-services option. Validation is done in the name of the ETH owner, but it comes with counter-party risk. In addition, you have to pay fees for running the node (which also applies in the case of solo staking).

Those who do not have 32 ETH and want to stake a smaller amount have 2 more options. Pooled staking and staking on centralized exchanges. Pooled staking is a service that will give stakers ERC-20 tokens for ETH. ETH coins are then used to run the validator. Pooled staking service is not a native Ethereum feature and is run by third parties mostly through smart contracts. There is a counter-party risk associated with this.

Pooled staking, like staking on centralized exchanges, is disadvantageous from a network perspective as it centralizes power. Whoever holds the ETH also holds the decision-making power. In other words, stakers delegate power to a third party and lose control over how ETH coins are used. For example, there is the question of what happens to the value of ERC-20 tokens if the protocol slashes the ETH coin of validators that are run by a pooled staking service. In the case of centralized exchanges, the same question arises. Who will compensate the delegates for the financial loss?

Slashing is the Ethereum protocol’s ability to permanently seize coins, forcing validators to behave honestly. Cardano does not have slashing, so it is not necessary to lock ADA coins for a certain period of time. Delegates do not risk losing their own coins. The only thing delegates may lose is the reward if the pool operator fails in his job of producing blocks. The reward is a sufficient financial incentive for delegates to supervise pool operators and at the same time for pool operators who want to keep delegates.

Slashing requires locking ETH coins for specific periods. Unlike the Cardano network, coins are not liquid during staking. Slashing may discourage staking. For some people, the idea of not being able to sell ETH coins in a bear market, or spend them when they need to, can be annoying.

But slashing is particularly annoying when combined with trust in third parties. Anyone who entrusts ETH to a third party faces the risk of slashing and the third party may not have sufficient funds to cover the loss. If the value of ERC-20 tokens tied to the value of ETH declines, all token holders will be affected.

The Cardano network does not require delegates to trust third parties. Users always have ADA coins under their own control. This is due to the fact that a high amount of coins is not required to engage in staking. Further, there is no need to lock coins. Stakers thus constantly control their own decision-making power and hence maintain a high degree of decentralization of the Cardano network.

More than 70% of the coins in circulation are staked in the Cardano network. This is due to how easy and risk-free it is to engage in staking. ADA coins can be held by people in an HW Wallet Trezor or Ledger and still staked. For Ethereum, approximately 11% of ETH coins are staked. One can assume that many people prefer to hold ETH in their wallets rather than engage in staking and risk losing coins.

The more coins are staked the safer it is for the network. It doesn’t look good if only a minority of the coins in circulation are staked because there is a risk that some entity holds enough coins to gain most of the decision-making power in the network.

Cardano has capped the number of coins at 45,000,000,000 ADA. Ethereum will have an inflationary model after the transition to PoS and 1600 ETH will be issued every day. However, this is similar to the amount that will be burned as ETH uses a fee-burning mechanism. It is hard to predict if the total number of ETH coins will grow or decline. It will depend on the usage of the network. If the network is used a lot and fees are high, the number of coins may decrease over time. Conversely, if fees are low, there will be higher inflation. It is probably a matter of taste whether a fixed or a variable monetary policy is more attractive to users.

As for staking rewards, the APR for Cardano depends on many factors and is approximately 5% (it can be less or more). Ethereum currently offers approximately 4.1%. However, the reward can be as high as 10%.

Not your keys, not your coins. In the case of staking, this famous rule can be extended to not your keys, not your reward. If you stake on a centralized exchange, you own neither the coins nor the reward until you download everything to your own wallet. In the Cardano network, you only have 2 options. Either you are a pool operator, or you can delegate ADA to your chosen pool directly from your own wallet. Staking on the centralized exchange is completely unnecessary as you gain absolutely nothing extra by doing so and are just taking a risk. In the case of Ethereum, you have multiple options to stake and you need to weigh the pros and cons well. Trusting a third party may be a necessity.

For any PoS network, the stakers should have considered not only their own interests but also the decentralization of the network. The protocol should be designed to align the interests of both parties. In the case of Cardano, this was done a bit better than in the case of Ethereum, at least from our perspective. The reason is that staking on Cardano is more inclusive and stakers do not have to trust third parties. Staking is almost risk-free and coins are liquid. ETH locking and the threat of slashing may put some people off.

Stakers should also consider reward yield, monetary policy, and other factors such as the potential for coin value growth, adoption, and many other things. Best of luck to all PoS fans. 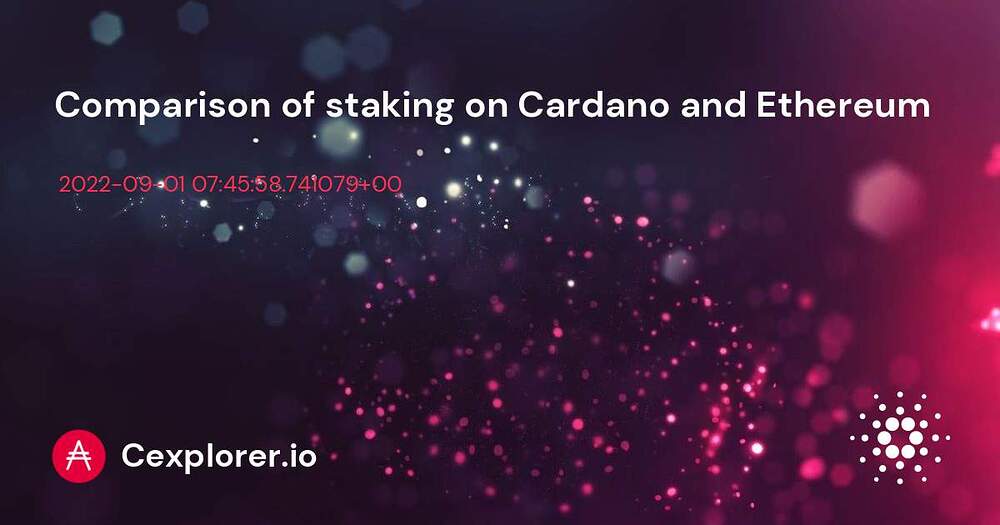 Comparison of staking on Cardano and Ethereum | cexplorer.io

Some people stake on Cardano for almost a second year. Ethereum is transitioning from PoW to PoS and people are starting to get more interested in the differences between the two PoS networks. Let's c

If you want to stake and maintain liquidity then you need to use a third party service which essentially exchanges your Eth native token for a data record in an ERC20 contract. This ERC20 contract has all the Ethereum smart contract hacking risks as well as the risk that someone could blacklist your address in the contract.

So liquid staking on Ethereum comes with all of the following additional risks:

Blacklisting could happen through a change in government regulation or even a court order resulting from a personal civil litigation.

I don’t know if the stEth ERC20 smart contract:

So, on Ethereum, what extra yield do you think would adequately compensate you for these extra risks?

On Cardano, the metric is simple because staking Ada does not carry any additional risks beyond holding Ada.

Then there are the centralisation forces that are created through Ethereum’s liquid staking hacky “work around”. Centralisation will always be a problem because people will naturally want to hold the version of synthetic Eth with the most liquidity.

I can’t believe that future investors will not eventually wrap their brains around these Ethereum flaws.