The Eternl wallet app has lately introduced their Staking Vault in an attempt to secure the financing of their wallet app.

The idea is that you lock an amount of ADA (between 500 and 1 million ADA) for a period of your choice (between 12 and 36 epochs). Since it is locked, they can pledge the whole amount in a private pool, get higher rewards, and give you a share of it, so that you also get higher rewards than in a “normal” pool.

I am more or less neutral on the question if this is a good thing. It has the potential to take away stake from our beloved single pool operators, but then again it gives some reliable financing to a quite good wallet app. The concept might not survive implementation of CIP - Shelley’s Basho-Voltaire decentralization update or similar proposals that take away the quite huge boost of pledging.

What I am interested in is how it works technically. It claims to be non-custodial, the ADA are supposed to stay under my control, although they are locked for some time. How does that work? 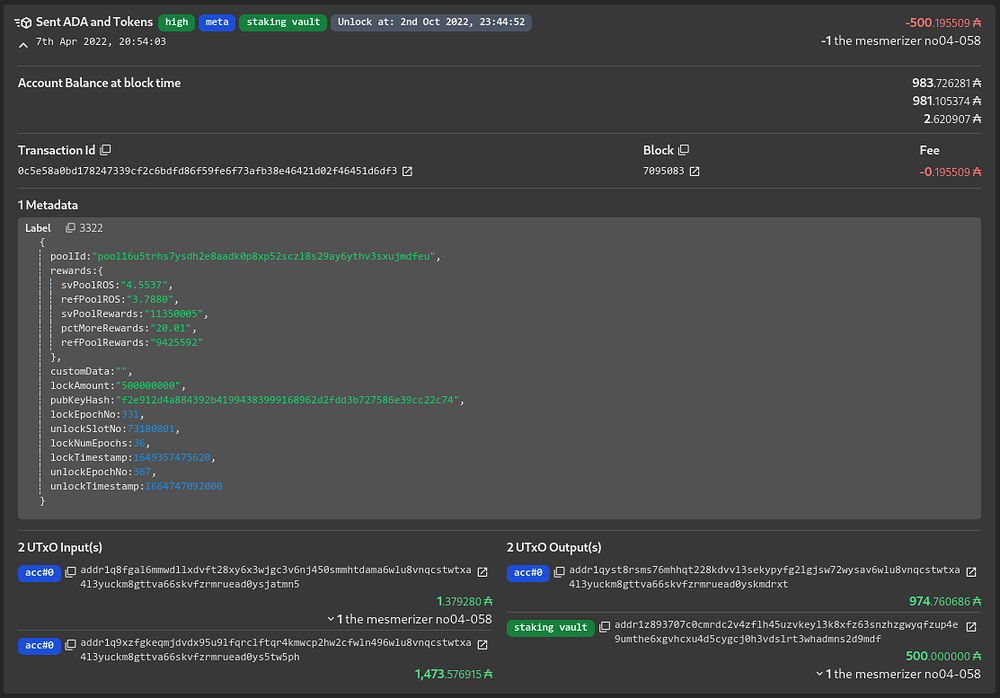 It has moved the 500 ADA and the NFT to this address:
https://cardanoscan.io/address/addr1z893707c0cmrdc2v4zflh45uzvkeyl3k8xfz63snzhzgwyqfzup4e9umthe6xgvhcxu4d5cygcj0h3vdslrt3whadmns2d9mdf
And this address is delegated to this pool:
https://cardanoscan.io/pool/pool16u5trhs7ysdh2e8aadk0p8xp52sczl8s29ay6ythv3sxujmdfeu
As expected that pool has a margin of 100%, so all rewards go to the pool operators (and I have to trust their word that they will give me the announced share – which I do). And all stake is pledged (since there are only three delegating stake addresses/keys, which are all pool owners at the same time). The committed pledge is a little below the active pledge, because it seems to be adjusted to newly vaulted funds only once per epoch (5.93 million committed, 6.54 million active at the time of writing).

The metadata of the locking transaction give all the details of the vault locking – agreed rewards, pool that is delegated to, amount, and also the exact unlocking slot and the hash of the key that I can use to move the funds back after unlocking.

The Staking Vault uses a simple native script to achieve this locking. You may have seen native scripts, when dealing with NFTs or other native tokens. They can express conditions like: “A transaction may only be done after this slot, before that slot, and has to be signed by this key and one of those keys.”

With the information from the metadata, we can construct the locking script:

This means that funds on this contract address can be moved by the key with the given hash, but only after the slot with the given number has passed.
We can verify that this is really the script for this contract address on Cardanoscan:
https://cardanoscan.io/address/addr1z893707c0cmrdc2v4zflh45uzvkeyl3k8xfz63snzhzgwyqfzup4e9umthe6xgvhcxu4d5cygcj0h3vdslrt3whadmns2d9mdf?tab=script
(The script is only available on Cardanoscan after it has been given manually, because it is not stored on the blockchain itself, but only its hash is contained in the address.)

Do I have the key for moving the ADA back once that time has come even without Eternl’s help?

Through some talks with the Eternl people, I know they use the key with the derivation path m/1854'/1815'/0'/0/0 for the staking vault. (If you know a bit about derivation paths, you might notice that the first component is usually 1852' in Cardano. This is because the purpose 1854 is reserved for multi-signature scripts, which the thing we are doing here is an instance of – although we only deal with one signature here.)

Since I use a Ledger, I can get the public key hash by:

If it would have been a seed phrase wallet, we could have used:

Now, I know that I know the contract script as well as that I have access to the private key for the key hash given in that script. After slot 73 180 801 has passed, I could build a transaction moving the funds back to my wallet even without the help of Eternl (using the JSON above as --tx-in-script-file and signing the transaction with cardano-hw-cli with the 1854H/1815H/0H/0/0 key afterwards). So, this is really a non-custodial solution, where I keep the full control over the locked assets (but have to trust the Eternl team about really getting the promised rewards).

I love such threads, they are so valuable for the community!

Awesome, I’ve been wondering how that worked. Thanks for the explanation

Thanks. This is a nice explanation
One thing this does not cover is catalyst voting. The vault staking address will get the snapshot of the Ada power for Catalyst voting
So Eternal will get the voting power and its like you have delegated your vote to Eternl

Yes, they could, but I would suppose they don’t use it. We could search the chain for a Catalyst voting registration.

By the way: We have a quite similar situation with exchanges, with the huge funds of IOG, Emurgo, and the Cardano Foundation, and with the ADA locked in the emerging DEXes. I believe, none of them use their voting power, but they could.

I was looking for this explanation! Really appreciate you wrote this for community, sir!!

I have one request for you: I want to translate this topic for Indonesian Forum, is it okay for you?

I have one request for you: I want to translate this topic for Indonesian Forum, is it okay for you?

Alrighty! Thanks for your confirmation, sir!

More info about native scripts can be found on cardano-node/simple-scripts.md at master · input-output-hk/cardano-node · GitHub btw.

…, but it is a contract address. It does not have a private key associated with it that can arbitrarily spend the funds on that address, but rather a script – a native script in this case – and the payment part of the address is the hash of that script instead of the hash of a public key.

Conceptually, it is much closer to a smart contract than to a “normal” address.

Perhaps, they could write “'script address” instead of “contract address”. That is exactly what it is according to https://github.com/cardano-foundation/CIPs/tree/master/CIP-0019#shelley-addresses. It starts with addr1z like all delegated script addresses – Plutus or native – and not with addr1q or one of the other possibilities.

BTW: Cardanoscan cannot even easily decide if the script associated with an address is native or Plutus. It cannot be deduced from the address alone, but only be seen in transactions successfully spending UTxOs of that address.