My nodes are configured with 18gb of RAM.
I have 1 node that is using 95% RAM for normal operation, and it appears to be locking up the node every 20 minutes or so, or at least that is the pattern I see. Using the top command, I can see the cardano node is using the 95%. On my second relay node I’m only using 70%. I have rebooted the problem node several times, but the RAM usage spikes back to 95%. Any ideas on where I can look for an issue? 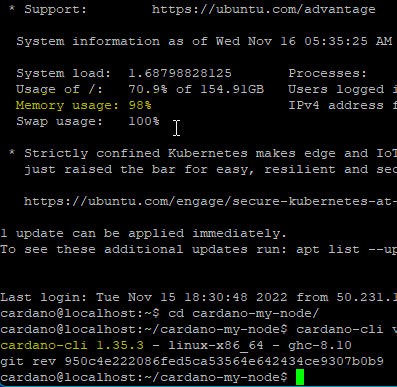 I wonder if I should just rebuild it. What has me puzzled is it’s the same configuraion as my other relay.

It’s the same on both and the file is configure identically.

Do you run any RTS flags in your start script?

Remove them and restart the node.

Did you make any changes to config.json lately?

Get new file and restart the node.

I did download the new config. After a few minutes the memory spiked back up. I did not remove the settings in the startup script yet. Do I remove the text before --topology?

Usually, RTS flags are meant to optimize the node but maybe not your case. Try to remove the parameters below and restart.

The node is a Relay or Block Producer?

It’s a relay node. The memory spiked but it has not locked the node up. If it does, I will try your recommendations and report back. Thank You.