Why inclusive categorisation is so important 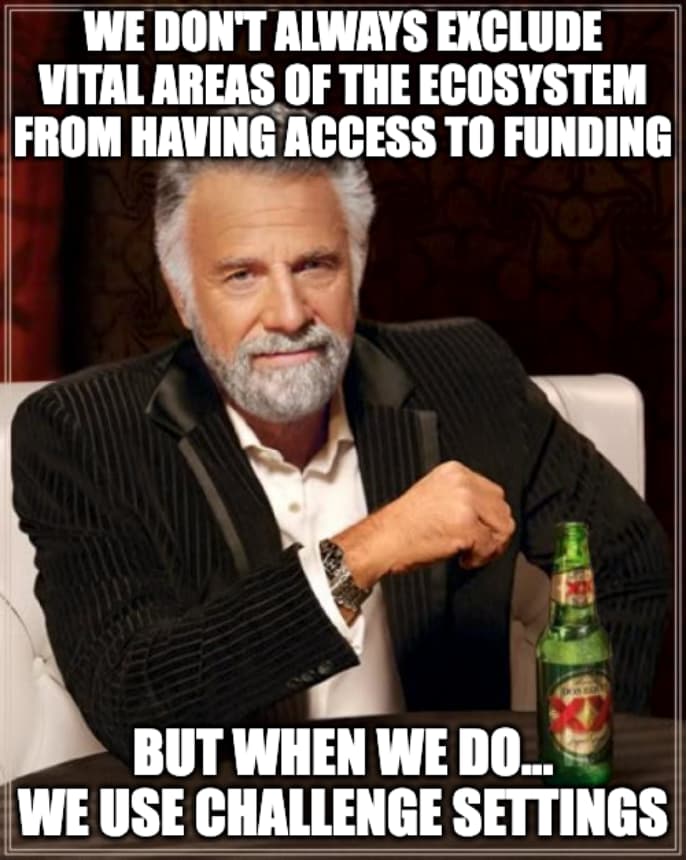 Inclusive categorisation means allowing all forms of idea and innovation to be submitted and considered in a funding round.

Exclusive categorisation means certain ideas and innovation are not able to be submitted.

Exclusive funding categorisation causes a number of problems. Problems that are unnecessary and avoidable if better categorisation approaches are used.

Check out our analysis on the differences between inclusive and exclusive categorisations.

Exclusive funding categorisation stifles innovation as it prevents certain ideas and innovation from being submitted. This means they are not able to considered for any further funding to continue their work.

There’s no better way to badly stifle innovation than fully excluding certain focus areas and giving the proposers no chance whatsoever to be considered!

Funding categorisation that is exclusive under the challenge setting model is currently voted on every funding round. Giving voters a number of options and combinations of categorisations that can lead to exclusive rounds of funding increases the complexity of their governance decision.

Funding categorisation is predictive of what will be submitted as it is set before it’s used.

Excluding focus areas in a funding round means the voters will receive less options at the time of voting. This is because only included focus areas can submit proposals meaning there will be a smaller subset of potential ideas submitted.

If proposals for the included focus area don’t turn up or are of low quality the voter is less able to redirect their vote to higher quality proposals that could have come from different focus areas.

Also if the voters preference change on where funding should be directed then they are unable to do so as the categorisation is already set and being used!

There is a fixed amount of funding available each round. If you exclude ideas from a funding round this means spreading the same amount of funding between a smaller number of ideas. This reduces the competition between the remaining ideas as they have access to more funding.

This also removes any chance of healthy competition between the ideas that are excluded.

Exclusive categorisation leaves less room for the voter to change their vote based on what actually happens in terms of proposals submitted.

If the community has certain preferences where funding should be allocated they always can direct funding towards that proposal through the use of their vote.

Using inclusive categorisation means accepting the fact that what the community wants to happen collectively may not actually happen at the precise time they want it too. In those events the community benefits from having options to decide from for where to allocate funding most effectively.

Inclusive categorisation opens up the door for exciting ideas that no one, or at least the majority of the community, was thinking about. The community can still have the same preference of directing funding to a certain group of ideas but now they get the added benefit of being able to consider and react to situations where that preference changes.

Funding categories invite all forms of idea and innovation and also introduce a contributor funding model to support and improve the ecosystem.

The most effective way you can ensure that fund 10 is an inclusive funding round is to upvote the funding categories full fund proposal!

We definitely ran into this issue and were following your & other Catalyst messages on this subject at the time this concept was being documented near the beginning of the Fund 9 proposal stage. It was quite a shock when a proposal which prefaced our own in the “Open Standards” category in Fund 8:

… had no corresponding “Open Standards” category in Fund 9: even though terms and categorisation relating to “standards” were still mentioned on the Catalyst GitHub pages regarding funding categories.

This led to a somewhat awkward situation (though I’m happy with the proposal that developed from it): In order to present our proposal it had to be beaten into an entirely different shape… effectively “rebranding” it for suitability in a category only indirectly related to our project’s primary purpose:

If you spot any confusing cases please let me know in the Telegram chat. I’ve noticed more edge cases to add to my to do list that I’ll be clearing up on the funding categories soon to make it clearer where some areas go inside categories.

CIP editor work could either go under Cardano Contributors for people who want to work full time, or Development & Infrastructure which mentions standards and is more focussed on the Cardano infrastructure itself. Also it could go under Nurturing Ideas & Teams which accepts anything Cardano related - will be interesting to see how that one is used!

Part time for CIP editing work also feels like one of these great contenders for this community contributors concept that will be great to trial sometime soon. Is a really flexible contributor category for working in the ecosystem on whatever they believe would add value - Overview - Community Contributors