This is Giovanni, EASY1 Stakepool Operator.

If you like what you see, please consider supporting me by delegating to my pool: EASY1.

I’ve been head down learning about Djed the Cardano/COTI stablecoin. After few hours of reading and watching Shahaf interview, I’ve decided to create a website where simulating Djed and Shen minting/burning and implement all guards as per Djed spec.

This is the website https://www.playwithdjed.com/ obviously there can be errors and mistakes, but I think the overall idea should be correct.

Feedback is appreciated and if you’re a front end developer and make this webapp even nicer hit me up!

Thanks for finding the time to test and review!

From the doc Shen initial price seems to be 1 dollar worth of ada.

Setting it to 1 USD worth of ADA at the beginning would also not make too much sense, be a little arbitrary. It will rather quickly deviate from that and probably never again meet that 1 DJED = 1 SHEN = 1 USD situation from point zero.

at would mean that your “ADA

Okay, I’ve reviewed and I think you’re right, initially 1 shen = 1 ada and not as I thought 1$ worth of ada.

I’ve also renamed the reservers and fixed the reserve calculation, that was indeed wrong, I had ment to calculate Reserve / Liabilities (ie total ada / djed in ada) but I obviously screwed it up.

I applied all the suggestions fixes. Let me know what you think and thanks again for the review

Thank you so much for the effort you are putting in this!

It looks much better now. One point I still noticed are the fees: 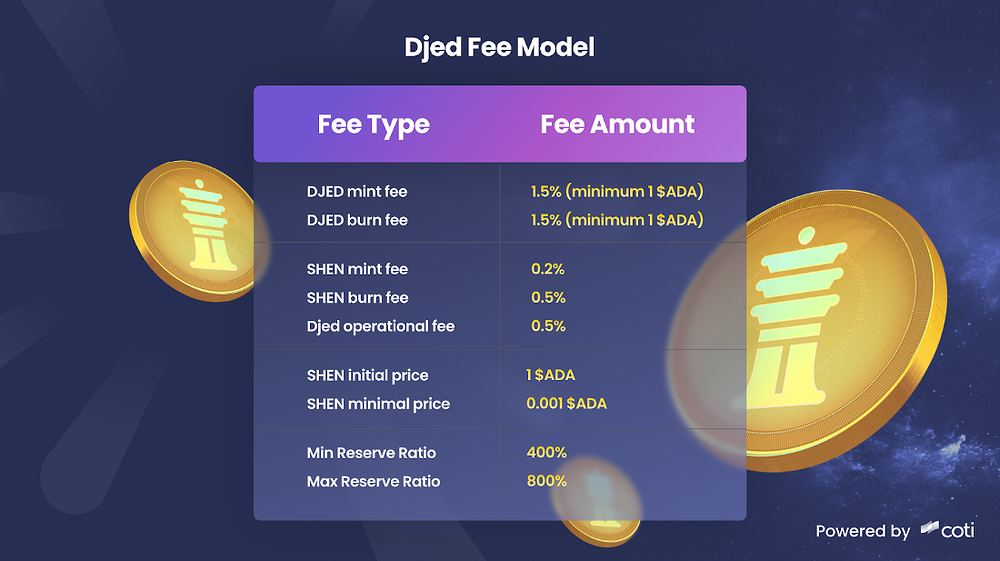 Seems to be wrong by a factor of 10 somewhere.

Sorry for all the nitpicking!

Oh dude, why are you apologising?!!

ANyway, I used to be good at math… obviously not that much anymore!

Yeah I added one 0 too many. Maybe it’s the hosky influence.

I had ment to calculate Reserve / Liabilities (ie total ada / djed in ada) but I obviously screwed it up.

I just wanted to start replaying my manual example in it, when I realised:

When going further in the simulation, I noticed that when changing the ADA price, the displayed collateral ratio is always the one of the step before that:

Also: Could the numbers be rounded to get rid of the spurious decimals?

YEah I was using the wrong ada price to compute the new collateral. Pushing a fix now. is 4 decimal ok? Prefer less?

I think 4 is totally okay. Just to get rid of those nasty floating point errors.

I just added tosts (notifications) for successful mint/burn, with details about:

Further things I noticed while doing:

Yeah collateral now it’s an integer, I;m about to release a fix to remove the decimal part. I don’t think it adds much

Any suggestions on the formula? Currently I calculated it as follows (reserve - liabilities) / shen supply. That should to < 0 in case of depeg, right?

Yeah that’s a case limit I never thought about. What do you think it should be the value there?

What the paper does:
It redefines the price of the stablecoin/DJED to be exactly reserves divided by number of DJED in circulation:

(the second case of the min)

Don’t really know how to present it. Maybe mark the DJED supply in ADA as depegged in red, when it happens, when we slide into the second case of that min?

Regarding the price of SHEN: 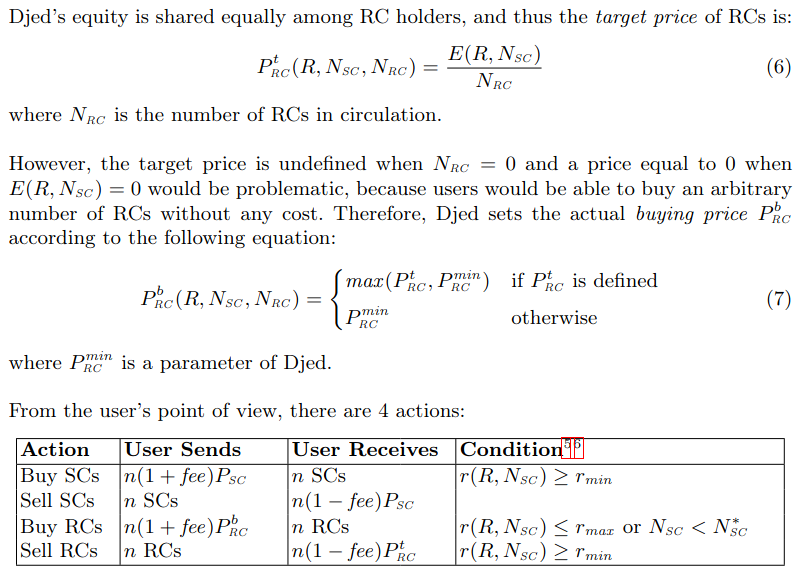 There’s a difference between the target price and the buying price (no such difference for DJED). The minimal price is only relevant for buying, not for selling SHEN. So, I’d give “SHEN supply in ADA” exactly as equity, 0 in the depeg case (but probably show the buying price as price nevertheless).