There already are some resources to learn about the DJED algorithmic, crypto-backed stablecoin system:

In order to show (and see myself) how different movements of the ADA price and operations in the DJED system play out, I am constructing a toy example in the following. (I do not consider the different kinds of fees – see https://medium.com/cotinetwork/everything-you-need-to-know-about-djeds-fees-413ac2c6a55f – in this example.)

The operations that are possible – minting and burning DJED (the stablecoin) and SHEN (the reservecoin) – are shown in this graphic from the FAQ: 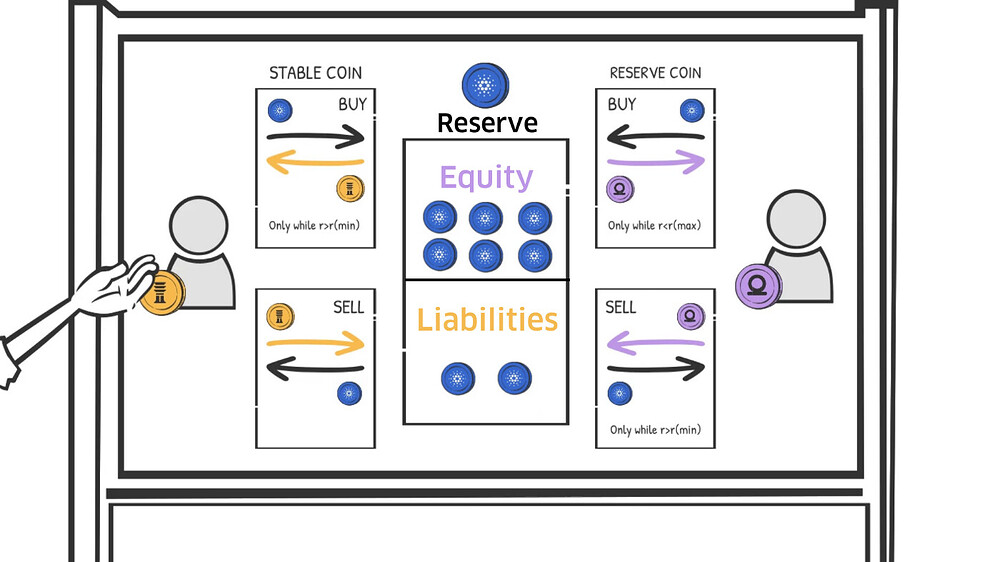 In our example, we start at an exchange rate of 0.5 USD/ADA or 2 ADA/USD – close to the current exchange rate. This means that people could mint DJED for 2 ADA/DJED, but this is not allowed at the beginning, since the reserve is empty and after minting the DJED we would be way below the minimal reserve ratio of 400% (exactly at 100%).

First, some people have to mint SHEN and put enough ADA into the reserve. (This would also be disallowed, because the reserve ratio would be ∞ after that, but in the paper – and hopefully in the implementation – there is an exception that minting SHEN is also allowed below a certain number of DJED in circulation to allow bootstrapping the system.) The initial price of SHEN is set to 1 ADA/SHEN. So, some of our example people buy/mint 600 SHEN for 600 ADA (worth 300 USD currently).

If you expect ADA to go up, holding SHEN will give you an additional boost. You will get more ADA back in addition to the ADA being worth more USD.

Interestingly, if ADA now loses only a bit of value, we go below the 400% minimum reserve ratio and buying/minting DJED and selling/burning SHEN is not allowed anymore. Even if SHEN holders are not allowed to sell, we can still calculate the value of the SHEN at falling ADA price:

So, because of the trades done at the peak of the exchange rate, the SHEN rates that our example SHEN holders had on the way up are reached at much higher ADA rates on the way down. They will be in the loss zone quite fast.

Below 1.25 USD/ADA (which are 25% of the value it had, when we last had 400% reserve ratio), the system will start to depeg. DJED holders will not be able to get the full equivalent of 1 USD in ADA for 1 DJED, anymore.

There are several ways to regain the peg:

For the last point: The SHEN rate never really goes to zero. The minimal price for SHEN is a protocol parameter that will be set to 0.001 ADA/SHEN according to https://medium.com/cotinetwork/everything-you-need-to-know-about-djeds-fees-413ac2c6a55f. So, people get SHEN really cheap, but not for nothing, in this depeg scenario. This will, however, distribute the equity also to these new SHEN holders on the way up again, which makes it still tougher for our old SHEN holders from the first way up.

I’m quite curious, how this will play out in reality through a real bull-bear-cycle.

Thanks alot for your research and good explanation with understandable examples. Often the research papers are much too abstract and complicated for a large number of people.

So, because of the trades done at the peak of the exchange rate, the SHEN rates that our example SHEN holders had on the way up are reached at much higher ADA rates on the way down. They will be in the loss zone quite fast.

Indeed. Much will depend on how good the Ada/Djed traders are at pulling profits out of the Djed contract. Shen holders are passively taking the other side of this trade.