How many Zombies are among us?

my question may seem provocative, but let me explain briefly and you will see what I mean:
Yesterday a pool “flick” retired - at the moment I think the retirement rate is increasing, due to the low price - and I observed what effect this has on the delegators. Result: The vast majority of delegators simply remain seated. There are still 1857 (May 26th morning, Berlin Time).
Among them a whale and let’s say big fish.
Okay, you can now say that they have announced their retirement due to insolvency at relatively short notice, they will notice it.
Then take a look at the MELD pools:
9 pools, MELD1 to MELD9, on which hundreds and thousands of delegators are still sitting, although some of them have been retired for a long time.

Explanations? It seems that there is a not insignificant number of wallets that nobody cares about anymore. I wouldn’t be surprised if they never find their password and phrase anymore anyway. You could also say: Look, we have ADA-Burning, in the brains of the users…
If you look at the numbers of the mentioned pools, the percentage of zombies (users who forgot that they have ADA in a wallet or who forgot their passwd and phrase or whatever) should be relatively high.
How high do you estimate the rate? As sorry as I am, it puts the data on new wallets into perspective and, of course, it hurts as an SPO to watch it… 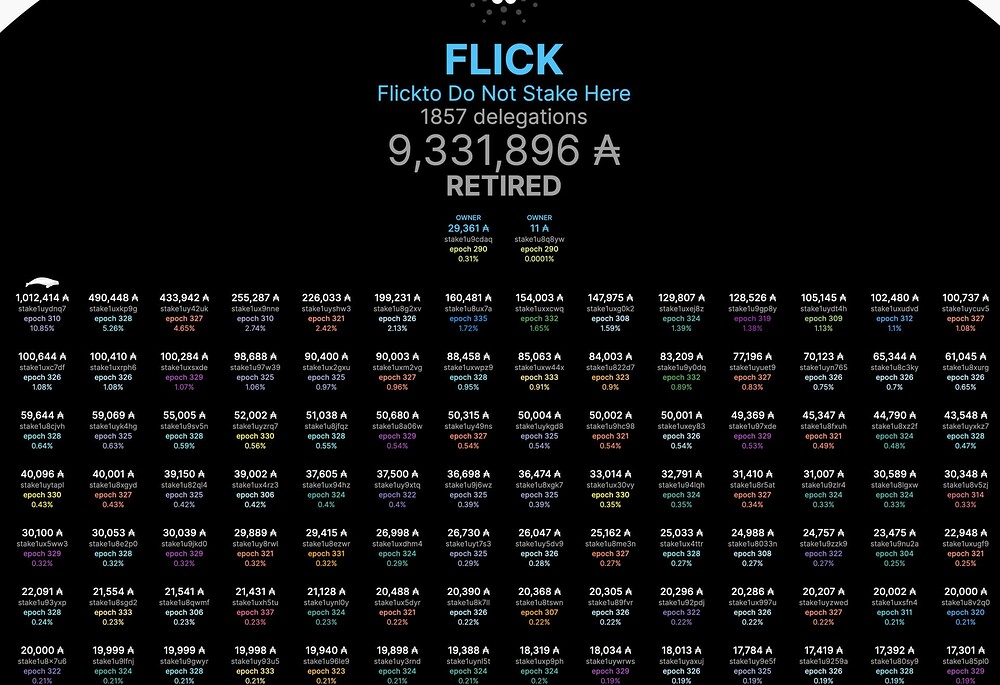 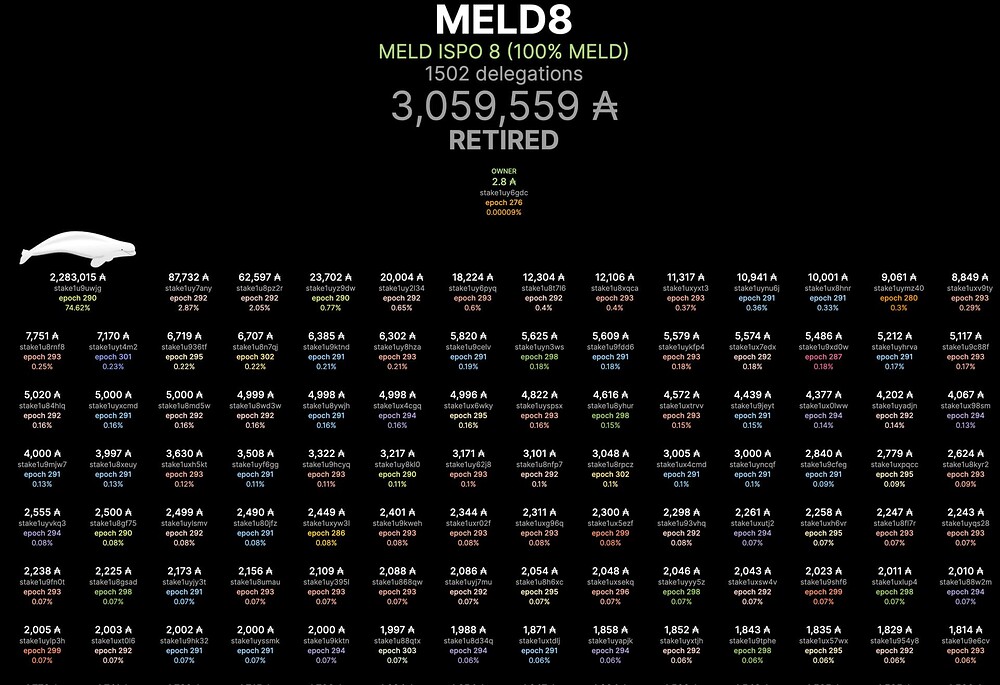 Looks indeed strange but I cannot believe someone looses the keys to a million ADA. Maybe a mechanism build into the protocol would be nice to distribute the content of dead wallets to the treasury.

Yes, this has probably been suggested elsewhere, but it contradicts the basic philosophy somehow. There are other cases, e.g. in another article I presented the pools of IOG, which are now retired, but where some still have millions in unclaimed rewards lying around. E.g. IOG15, if you look at the history of the 1.6 million stake (rewards), you can see that it must have been a stake of about 130 million, so it’s not impossible that it was even an IOG wallet.
I had already written to IOHK in this regard: no reaction - so it seems to be unimportant.

Yes, this has probably been suggested elsewhere, but it contradicts the basic philosophy somehow.

I remember it being proposed before, but I also think it’s not possible without sacrificing too much of the concept.

We cannot decide, when a wallet is “dead”. It’s totally legitimate to let it lie around for years without accessing it and we cannot just disown people after an arbitrary span of time.

Moreover, a mechanism for moving funds without the signature of the owner could potentially open the system for a whole new class of security holes.

I absolutely agree, I could have expressed that more clearly:
Everyone who creates a wallet gets told yes, they have to remember their phrase etc.
Legally and technically this can’t really be justified - So I don’t think this can be a solution either and my main point was to make clear that this probably affects more wallets than I had originally suspected.
They are far from being isolated cases.

That’s why I think it will be good at some point to implement a “forgotten jubilee” function in our blockchain.
We human survive because we forget. Forgetting help our optimism because we have an asymmetry in forgetting. We forget bad moment more easily than good ones (think of childhood memories). We also all see the problem with an Internet that does not forget.
I think there’s room for a blockchain that forgets fund that have been untouched for let’s same 99 years or a lifetime.

Babylonian had a jubilee where debts would be earsed every 50 years of so. Life was shorter at the time. :o)

Maybe a mechanism build into the protocol would be nice to distribute the content of dead wallets to the treasury.

That would still require the dead wallet’s owner to sign the transaction though.

This doesn’t seem right to me, consider an owner passing away, leaving a small child, with no family. the child deserves the funds over the treasury, can we structure a wallet to at least have the option to have a secondary owner if the wallet is dormant for a nominated duration, the treasury could charge a fee for storing/disributing the rightful new owner/s, basically a “will” with ratios within the wallet for people/institutions meaningful to the original owner.

I think, the solution could come from another side: regulation.

Or: Are there any activities, to implement the KYC principle? I can already see in my mind how a wave of opposition is rising in this round on the question, but it is a fact that the supervisory authority has very concrete demands in this direction and will also very likely implement them.
And, that should be clear to everyone who thinks anonymous wallets are untouchable: In case of doubt, the supervisory authority could give exchanges a further boost, because they implemented the KYC principle already, so there can be no more private wallets. Then good night, decentralization.

They could say it is to protect consumer rights, but both from the Cardano network’s point of view and from the supervisory authorities side, there are even more important reasons for implementing the KYC principle.

A possible solution could come up with DIDs with AtalaPrism - or not?

A possible solution could come up with DIDs with AtalaPrism - or not?

Only if they manage to implement something that will be even recognised by the respective authorities.

Possible. They have some collaborations with some governments somehow, already. But far from sure.

And even then, KYC only helps if either we (or the powers that be) implement a loophole, where the keys are not needed to sign transactions or the keys are deposited somewhere, so that they can be used in case of death or seizure or …

Some kind of testament smart contract could perhaps be implemented, but maybe it is simpler to just store seed phrases and hardware wallets safely and securely with instructions for the heirs on how to use them.

Im behind the 8 ball in terms of understanding the space, so please forgive my ignorance, please know that I love my initial concept of cardano!! however, this is very important to me, and its the difference between staying and growing within the cardano community, or leaving.

Is it possible to have an extra key/s that the owner allocates to a 2nd wallet, but the nominated key only becomes active when a smart contract is activated by the owner, or the owner has not used his/her account after X amount of years??

This must be sovled - can someone please get after it??

Personally, I have multiple hand-written copies distributed among desk, emergency document bag, and bank deposit box. Rouge spouse is a tricky one, though. If I do not consider my own home reasonably safe, it becomes much harder.

There are also these offers, where you can punch the seed phrase into metal.

And Trezor has a mode, where you do not have a single seed phrase, but an n out of m scheme: https://trezor.io/shamir/

Is it possible to have an extra key/s that the owner allocates to a 2nd wallet, but the nominated key only becomes active when a smart contract is activated by the owner, or the owner has not used his/her account after X amount of years??

With the simple script functionality, you could at least formulate: “This key has access now. This key will additionally get access in 10 years.” https://github.com/input-output-hk/cardano-node/blob/master/doc/reference/simple-scripts.md

With real Plutus contracts, activation by primary key or by some kind of “dead man switch” is surely possible.

But all this will prevent the wallet from being used with an ordinary wallet app. They all can only handle the standard seed phrase or hardware wallet mode.

Good suggestions, i considered all, except trenzor.
I’ll follow up on links when I get a chance

You said wallet1 would loose functionality if distribution was introduced, is it possible for wallet1 to have seperate modes? Or to sync a 2nd seperate live wallet2 that is viewable/restricted/cannot be accessed until wallet1 is classed as dead?

You said wallet1 would loose functionality if distribution was introduced, is it possible for wallet1 to have seperate modes? Or to sync a 2nd seperate live wallet2 that is viewable/restricted/cannot be accessed until wallet1 is classed as dead?

It would be totally possible to develop something like you wanted, specify it, and get wallet apps to implement it.

But to have such functionality, the funds would have to be on an address belonging to such a contract. And the current wallet apps have not implemented it. Would also be rather complicated to do it for arbitrary contracts, so we would first have to decide which functionality we want to do exactly how.

You’ve given me alot to think about, appreciate you bringing some clarity, cheers!!

C4S-Cardano4Seniors has a great concern with this very issue and would like to help champion a Community driven solution. Risk Management for Seniors specifically, requires careful consideration of wallet management and Seed Phrase inheritance or transferability with concern of dementia, etc.

The new Lace.IO wallet may be the platform to begin to address this issue. How will Cardano put itself at the forefront of the current 2 billion niche market the UN projects will double in 10 years. This potential 4 billion demographic will be at increased risk for ‘forgetting’ their seed phrase, as well as having other adaptive needs.

It is our social responsibility to address this issue before it becomes another public relations nightmare, not to mention the moral weight. C4S believes the Cardano family is the safest ecosystem for our global Seniors! We also think Cardano and Catalyst can greatly benefit from the brainpower and liquidity this niche possesses.

Let Cardano lead the Senior market in educating, Onboarding and safeguarding these citizens. Lets focus and work as a community to solutionize this wallet issue. Cardano4Seniors thanks you for your interest in making this a community issue.

I totally agree, and predict the number of people with cognitive impairment in the future to increase - until science can one day solve the issue.

C4Security may work better for this reason?

C4 is an explosive btw lol

Knowing this is a genuine barrier to mass adoption
I would love to see additional technical focus drawn to the purpose, and potential of a premium native wallet.

“A traditional bank does alot, its a financial hub, with many offerings, and partnerships”

We have the opportunity to redefine/work towards the equivalent or significantly improve the current models in a decentralized mannor.

Thanks for your response, makes me happy others can see the importance

@Bowen_Lowther thank you for your insights. We will be careful with the handling of the C4

A native wallet with Adaptive allowances may be a Proposal for future Catalysts. Currently, we are working on making C4S a self sustaining Cardano Community platform and in creating our native Educational system and language-ELI65 - for Seniors.

Please join our team or support our proposals in F9. If you could read (some still in creation stage) and critique with any new ideas it would be great.
Tom.

Dear all,
Meld pools are still full of ADA, most of the delegators don’t care at all, that they earn 0 rewards.
From Meld8 were 23.000 ADA redelegated during the last 8 weeks, in other words 0.75%.
Next Case is going to retire in 4 days:
Maladex Pools - they communicated over their HP and over Twitter that they are going to retire their pools (about 9 Mio. ADA all in all) but the stake is very stable at the moment regarding the retirement shortly before.
Example MAL pool with more than 4 Mio. ADA Stake

All in all, what do you think is the zombie wallet quote? I would guess around 5% overall. 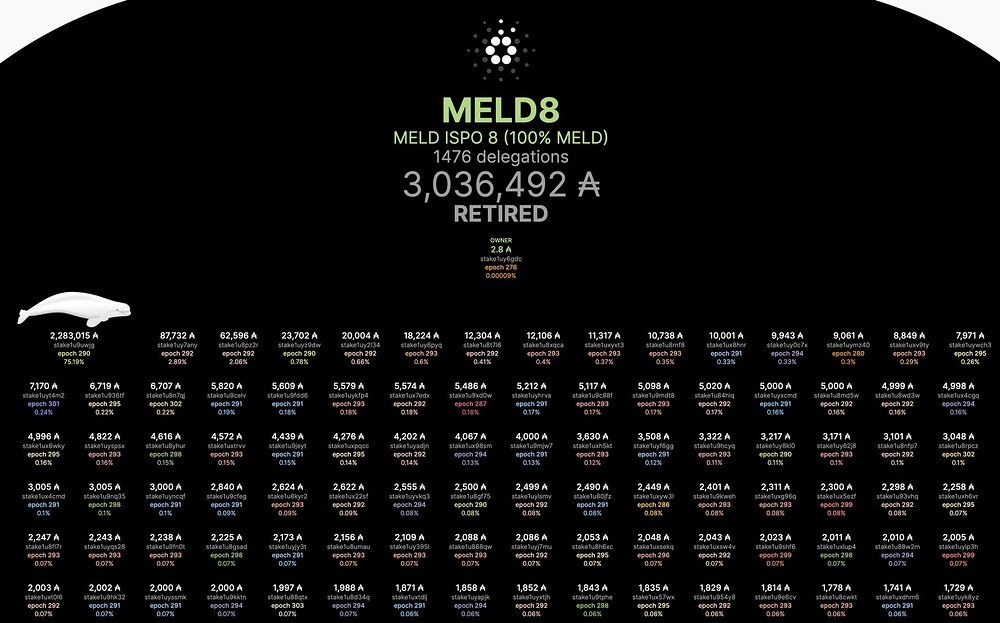 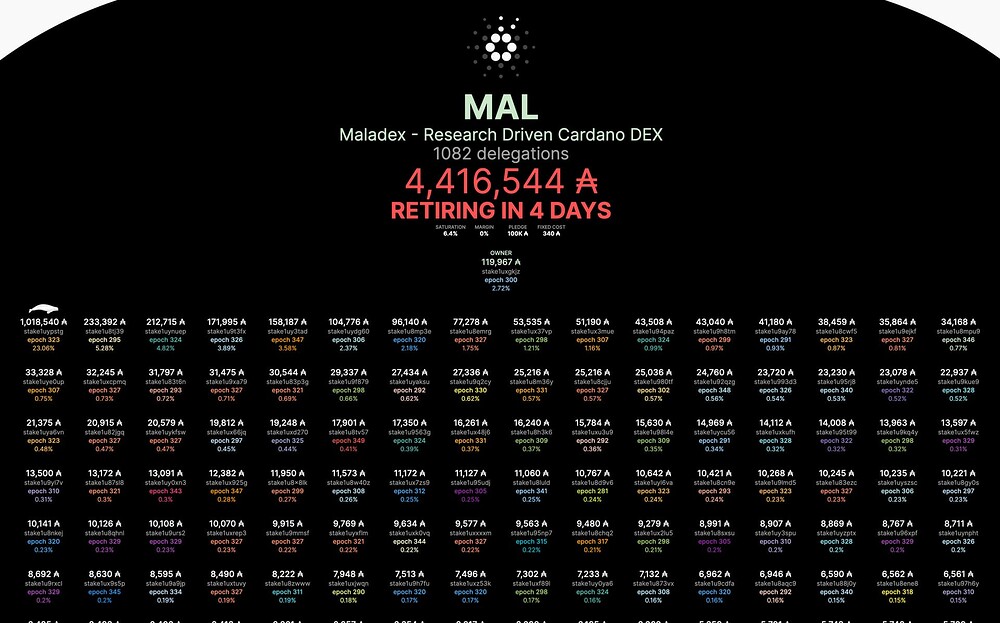