Getting to a Future-Ready Yoroi Wallet: Part 1 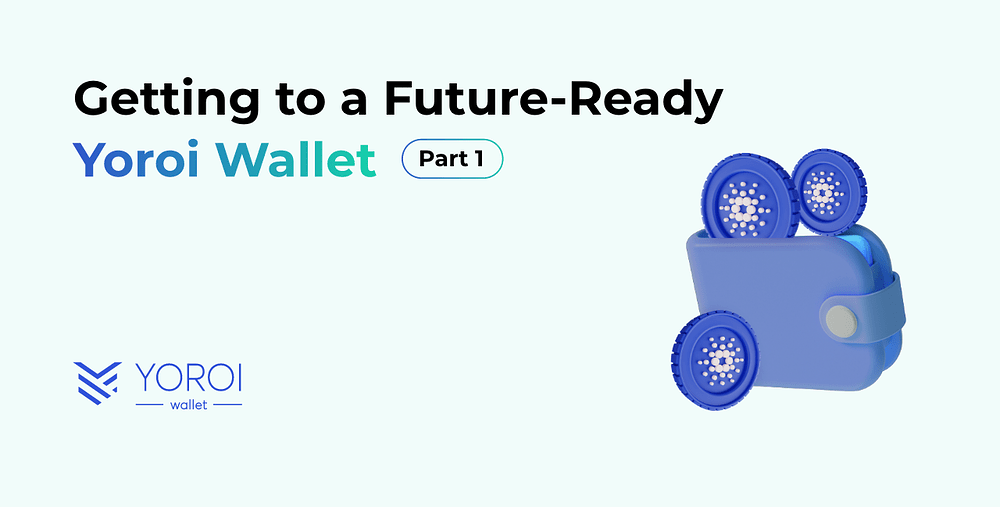 Yoroi Wallet is one of the most important products EMURGO has built.

Our cryptocurrency light wallet is the gateway to all other products, services, and features that we are planning including an especially exciting launch announcement for Cardano Summit 2022.

However, we do acknowledge that for some time, the performance of our wallet has left a lot to be desired and we have taken the last few months to address these issues.

Now that the first phase of Yoroi’s performance improvement plan is being put into action and a major improvement is scheduled to be released in the coming weeks, we would like to take a moment to explain what challenges we faced as well as our plan going forward to build a better Yoroi.

So as we lay out our phased approach below for getting to a Future-Ready Yoroi, keep in mind that this is a journey, with several stages involved – but one that we are committed to taking.

Let’s start with some history, as EMURGO has gone through our fair share of challenges and successes over the past few years, and it helps to put where we are in context.

The Yoroi of Yesteryear

Then right as Cardano’s user base started to rapidly grow, we experienced unfortunate changes in management and other difficulties.

We rushed to keep up with the demand and in that rush, we went down some wrong paths from a technical architecture perspective.

With new leadership this year, a seasoned Chief Technology Officer, and a dedicated technical team now on board, we’ve been able to reimagine and carefully re-engineer our product architecture, user experience, and development process.

The best way to lay out our approach is to use a Good-Better-Best (G-B-B) framework.

It’s a practical framework for Yoroi’s improvement progression and how we get to a future-ready Yoroi Wallet.

In Part 1 of our three-part series, we will cover Yoroi Good State.

In the following parts, we will discuss Yoroi Better State, and how we get to a Yoroi Future-Ready Best State. There’s a lot to cover, so let’s get started.

Decoupled vs. monolithic architecture: In the world of software, there are two types of architecture. A monolithic architecture acts and serves as a single system with components coupled together. In a decoupled software architecture, components of the system are built separately but integrated with well-defined interfaces so that a change in one component’s codebase does not impact the other. It also means that while one team is fixing one part of the app, another team can be improving another part without blocking each other.

Therefore moving the business logic and related data processing to the backend will ultimately provide the best user experience. After further analysis of the backend we have added the following features to achieve further performance improvements:

Yoroi Now: As part of our performance review, we looked into other options for managing the various data gathered from the Cardano Blockchain and from Yoroi Wallet itself. We’re now in the process of our switch from PostgreSQL to a Graph database which is great news for Yoroi users, as they will see significant performance upgrades when fetching data.

Our Yoroi users were commonly experiencing slow wallet syncing and other inconvenient performance issues. Sometimes this was caused by congestion and overload to our backend servers. To solve this, we’ve made a sizable investment to upgrade servers to enterprise-grade. We have added servers with enhanced memory and increased processing power to operate well during peak loads. This infrastructure enhancement together with software architecture changes has resulted in faster transactions and sync times

In addition, we are adding management capabilities to our data centers to monitor the health of our systems and respond to issues before they impact our users. Our new enterprise-grade infrastructure allows us to set a threshold for the amount of data we can handle, and when it goes over this limit or when something fails, we are notified automatically. This lets us scale up and down the infrastructure, or take other corrective measures, as needed.

There are many developments in Yoroi’s “Good State” that are not covered in depth here, but they are no less important.

Another example is the change in our testing process – a new effort to involve the Cardano community in testing wireframes.

In sum, the primary objective of Yoroi Good State is to lay the foundation for sustainable growth as Cardano adoption increases.

As the number of users and transactions on Cardano increases so will Yoroi Wallet’s relative performance.

Stay tuned for Part 2 of the Getting to a Future-Ready Yoroi Wallet series where we discuss EMURGO’s New Database Sync: What is it, How it Performs Better, and Why it Matters.

Yoroi is an open-source and the first light wallet built for Cardano ADA users to be your gateway to Cardano’s Web3 ecosystem of dApps including DeFi and NFTs.

As a self-custodial wallet, the user always has complete control over their Cardano ADA and can stake and unstake as they wish.

EMURGO and Yoroi Wallet would also love to hear back from the community. We have created a Yoroi community feedback form to gather ideas and ways to improve the Yoroi user experience.

If you need further assistance, contact Yoroi’s customer help desk here and a customer support specialist shall respond within 24 hours.

Hey, hello @William.Emurgo, welcome aboard! It’s a pleasure to read you here in the Cardano forum. Thank you very much for such a great compendium on Yoroi!

Thank you kindly for the warm welcome. We look forward to being active here. Best wishes!

Yoroi is one of only 2 open-source wallets, and is far from obsolete. Significant time and resources have been put into upgrading the wallet, with many unique updates coming in the coming months. Keep an eye on Cardano Summit, there’s so exciting news coming up. Best wishes!

thanks @William.Emurgo and company for staying ahead of these issues: it was a nice surprise to see this post & learn about this ongoing development.

This may be rare but our main reason for sticking with Yoroi for operational wallets is that we can see web pages for all components of the UI, instead of ported mobile panels showing as browser popups as in practically all other light wallets. If you can confirm that the new version of Yoroi still works this way, everything else will be like icing on the cake.