As u can see all coins are performing well, I think Gougen will skyrocket the price (market trust)

You’re right, everybody’s doing well, but for a change, we are doing better

I’m just wondering who is responsible for our case, that is, where the interest is coming from?
And hence how sustainable it is. Goguen (and “Mary” specifically) surely have a lot to with it, but I don’t think that’s the whole picture.

.
Not sure when that happened, lol.

I don’t know who said this, but suits the case!

In 1 year Cardano went from 16/17th market cap position to 4th; 3rd in the next couple weeks (or less). No other project/coin did the same. So… “performing well” and “doing better” doesnt cut it!

EDIT: Another great one! Sorry can’t help myself!

All truth passes through three stages. First, it is ridiculed. Second, it is violently opposed. Third, it is accepted as being self-evident.

Don’t they “join you” at some point @jpsrrv?

I guess that would be the winning

So as much as we both love “The Math” that’s driving us fundamentally, I can’t accept that everybody else suddenly chose 2021 to put their “critical thinking” hats on, and are now appreciative of peer review, and the full depth of the stack being rolled out, ettttttc.

When it comes to markets recently, it seems a safer bet to think something sillier is going on

.
But as the post suggests - I can’t myself make this tabulate.

Unfortunately no, IMHO. Just like Morpheus explains to Neo in Matrix, there are certain archetypes that rather die for the game as it is than be a part of his evolution.

That’s 101% accurate, which is to say that the most important role we have as a community is change that, step by step, to the extent of what we individually can.

True, minions lack critical thinking let alone deep critical thinking. And guess what, they love giving up their sovereingty and autonomy to self-proclaimed “authorities”. And beacuse they are starting to wake up and thinking, “wait a minute… they are just as human as me… how can they be “smarter”???”, and there comes AI/AL and deep this, deep non-human that. (another motive Cardano is going to be so disruptive certain totalitarists which “The Math” had never crossed this planet! xD)

Long-story short, CF is working a partnership with an E.U. blockchain org. So yes, the so antecipated and cried-out-loud institutional support is comming, to Cardano.

CF is working a partnership with an E.U. blockchain org

Thanks @jpsrrv! I totally missed this. So many cool things coming!

This also feels a bit early to me. I’m not hating it, but I would’ve enjoyed to buy low for some time. I think the opportunity to buy at < 0.5$ might have passed…

Welcome to the bull market!

It has been my thesis for several years that at some point the market would wake up to the fact that Cardano is one of the most advanced and well thought out products in the blockchain space and the longer it took for the market to figure that out the more explosive the upside would be. At this point this is all exacerbated by the bull market which is clearly working in our favor.

With all that said I’m sure there will be some price corrections along the way and the team has to keep delivering. What interests me is what happens when the bull market ends. My confidence is extremely high that this project will have a lot of longevity through the next bear cycle. In Bitcoin the top of the previous cycle is the low of the next more or less. Maybe that will be the case again. Every bull market people say this time will be different and we wont see a bear cycle like last time and undeniably things are pretty different this time. The central banks are printing money like crazy and Cardano will hopefully be showing real use and utility. With that said everyone has different financial needs and goals, so think about a range of possible price outcomes and come up with a plan of action that fits your needs as the situation develops. It pays to be a step ahead of the market and you can never time it perfectly. Unless something dramatic happens I always plan on HODLing a chunk but I’ve been formulating a plan since 2018. Now it’s time to have a steady hand and execute. Very exciting times and I wish us all luck! This is a special project and a very special community. We are all blessed to be here and I think we have a responsibility to the world to help fulfill this dream. The true magic of Cardano is that it not only has great technology but it also has a grand vision and a story that is inspiring. Many come for the financial gains but stay to be a part of something that gives us meaning beyond money.

Edit: I realized I never really answered your original questions. there are a lot of specific things going on that are affecting price action in my opinion. Mostly I think what is going on is people are starting to believe that Cardano is not just vaporware but could actually be a possible alternative to Ethereum. There have been many projects that have tried to challenge Eth (EOS, Tron, etc.) but none have succeeded. Many in the market still think it’s impossible to challenge Eth and to try is folly. I am starting to see the dominoes fall. Still a lot of work ahead but Charles and the team are making believers out of people as the wisdom of the development approach is becoming evident. The momentum is in our favor but now we have to deliver. Sometimes the promise of something is better than the reality which is where the saying buy the rumor sell the news comes in. In the case of Cardano however, Charles has been pre-visualizing this play out and I am confident not only in what he says but in what I have seen get delivered. I’m aslo confident he has some tricks up his sleeve we don’t know about. Eth has pretty major problems right now with fees. Cardano is peaking at the right time from a development standpoint. As far as specifics we have Multi-assets about to be launched, ERC20 converter, Goguen (Huge) Ouroboros Omega, Hydra, Coinabase listing and possible collaboration, and African deals. Also people are starting to see cracks in Ethereum’s armor.

@rin9s I think you came back at the right moment actually! 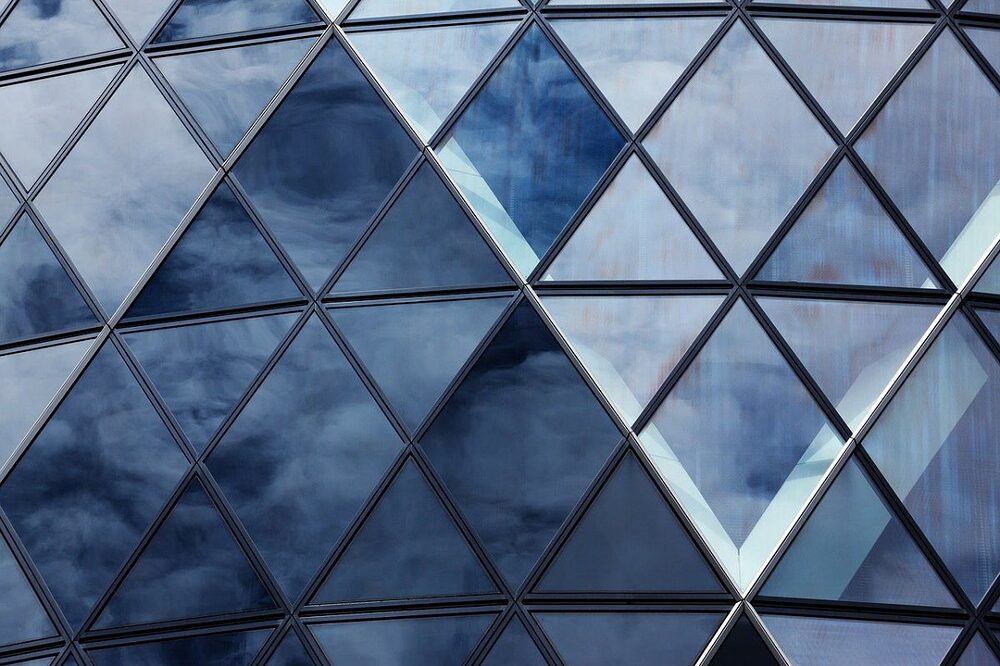 SingularityNET, a decentralized platform for AI apps, is in the news today after its most significant democratic vote came to an end, with CEO Dr. Ben Goertzel announcing the results on YouTube. The aforementioned vote took place after a phase two... 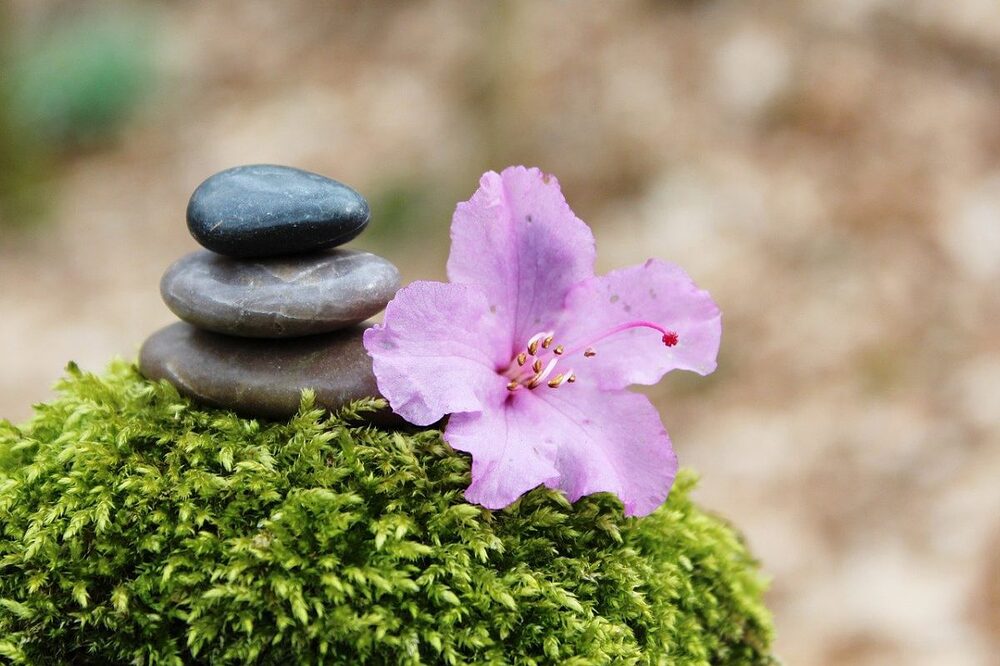 Binance, arguably the world’s biggest crypto-exchange, has often made headlines for the host of regular developments in its ecosystem. It is in the news again today after the exchange announced that it has launched staking services for two more...

I’ll have a proposal draft in Catalyst to seek means of having the entire team of Cardano getting together to sip some margaritas and dance hula!

Your proposal is definitely getting my vote! Thanks for those links I missed the Binance news.

What’s up mate? Thought about tagging you, but figured you would find your own way if you wanted. I’m glad your thesis is proving out

got tips for execution?

Glad more are seeing the promise of the project, but I really thought it would get kicked off by something like a Coinbase listing… I’m also surprised the community isn’t more abuzz about this… No word from the prophet… And so much yet to come…
You imagine we could overtake Eth’s market cap by year’s end?

Check out the 1st 6 or 7 minutes of Charles recent AMA for his sentiments: 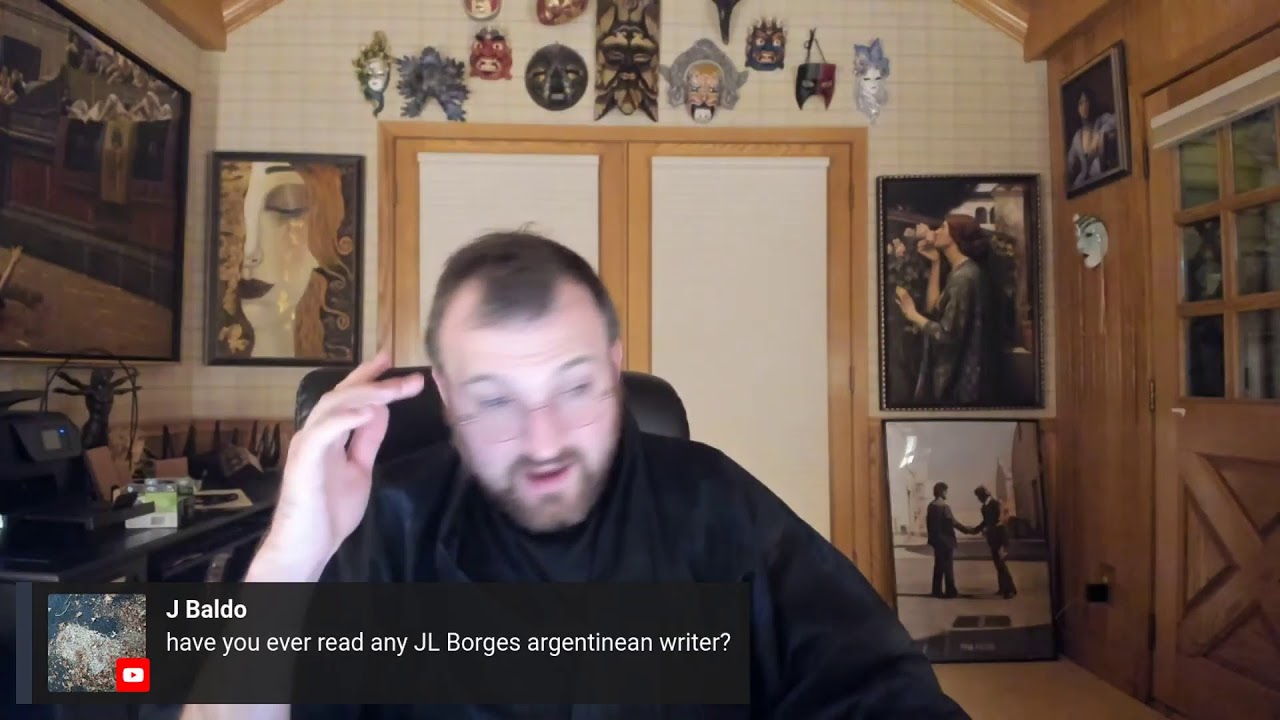 Regarding execution, I have to say even I (a permabull) am fairly shocked at this run up. We may see a sell off at $1.00 as people take profits but I don’t think it will slow us down for long. I’m thinking of selling a bit around $2.00. Most financial advisers recommend not getting greedy and taking money out in steps basically reverse dollar cost averaging. I do think we have a lot of room to run though as I really do think Cardano is light years ahead of Eth and the rest of the world is going to figure that out soon. On the other hand it seems like all the markets are made up of bubble on top of bubble fulled by the money they are printing. Sometimes I think keeping it in crypto is the safest thing. By most estimates we are still in the first half of the crypto bull market.
When I first found Cardano I got the same feeling I got about Eth in Early 2016 for what it is worth.
I don’t know if any of that helped or was even coherent and everyone reading this should realize I am not a financial adviser. Crypto is a very volatile asset class and never invest what you can’t afford to loose.

BTW another possibility is a lot of this money is Robinhood guys jumping in to chase gains.Because Ada looks relatively cheap at under a buck and they don’t understand how market cap works…

Let’s throw some wild numbers out there, for kicks. For reference - Bitcoin scrambling towards 1 Trillion US as we speak, Amazon ~1.6, Apple $2.2T, world gold reserve $10T+, US debt $26T and counting…
What are we talking here?

I believe at a trillion dollar market cap Ada is around 33 bucks, but I stink at math so double check me on that. I mean if we are talking about running major portions of countries economies I certainly think we could get there and beyond. Might have to wait till the next market cycle or the one after that though.

is that your 5 year target?

Eventually people are going to realize that Charles is serious when he says he is building a decentralized global scale financial operating system.

This bull run for ADA needs to cool down a bit. Too high too quickly. There’s going to be a pullback. The more ADA keeps shooting higher the harder she’s going to fall.

To those joining us just now, $0.9 is behind us and the deadline has been moved up to Sunday brunch

Interesting how BNB’s pattern seems to follow closely these past couple of weeks, or maybe just a coincidence… 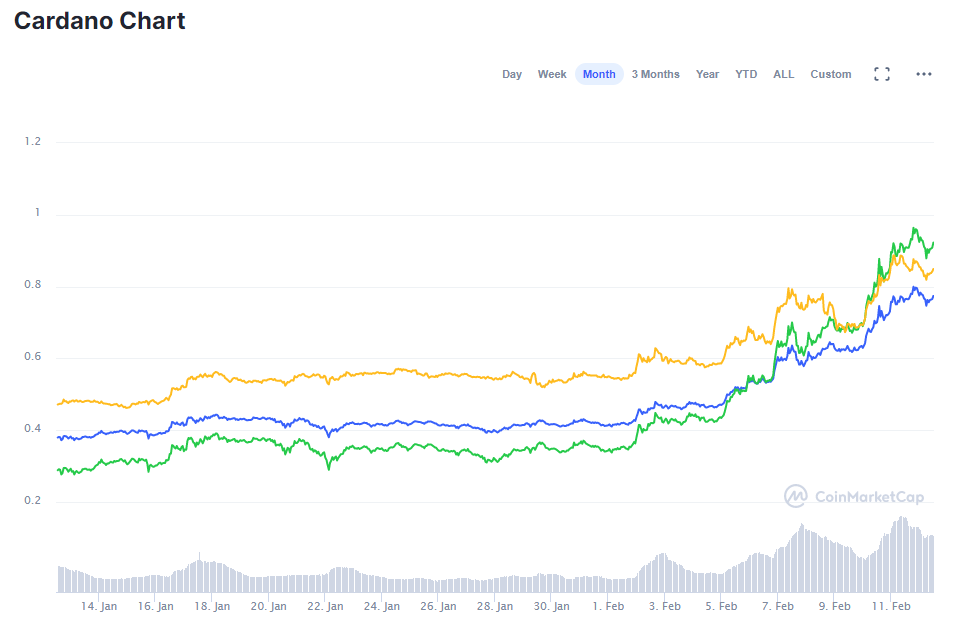 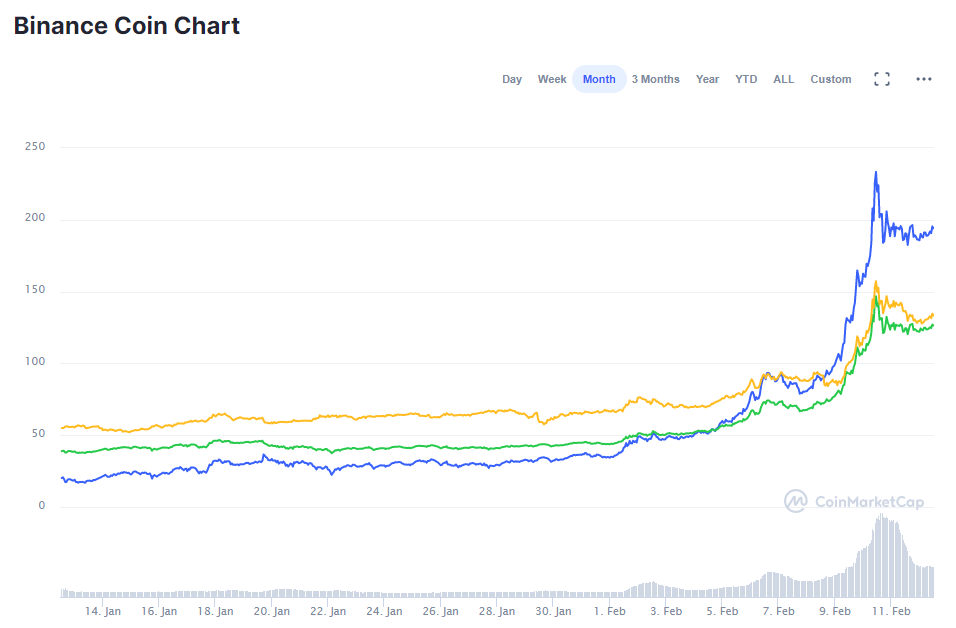 I preffer it going to 5000 sats. Long time ago I only think on sats conversion.