I sent some more ADA to my pledge wallet and I want to resubmit my registration to increase my pledge amount. Are the pledge wallet rewards included in the calculation by Cardano to verify my pledge is met or do I have to claim them to the wallet? Just want to know before I go through the reregistration process.

Hi!
if the amount is on the pledge address then only steps you need to take is the re-registration with the updated pledge amount. pool sites might process this new info in the following epoch…

maybe we need some help from @Alexd1985 I think the reward not automatically added as stake… you need an address which is delegated to the pool. if the amount is on your pledge address then it is not considered as staked address. you need to explicit tells how many amount you want to pledge from the pledge address

I sent some more ADA to my pledge wallet and I want to resubmit my registration to increase my pledge amount. Are the pledge wallet rewards included in the calculation by Cardano to verify my pledge is met or do I have to claim them to the wallet? Just want to know before I go through the reregistration process.

Good question … I pledged 45k and never withdrew the rewards from the wallet; I see in pooltool.io that the rewards are also calculated to met the pledge 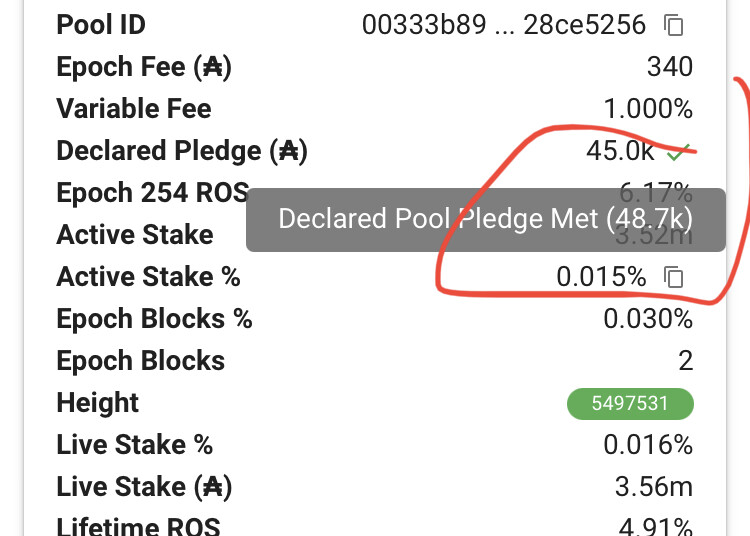 This would be really good to actually confirm - preferably on testnet - I will try it there but it will take couple of epochs for this experiment to finish.

It’s perfectly possible that this will be a problem, tools like pooltool are easily confused, (I managed to hit so many bugs with it).

Unless someone confirms that this works for sure 100% BE CAREFUL there is a chance that adding a pledge to include also unclaimed rewards, will not be considered as fullfiled pledge by the blockchain invalidating all your potential rewards for all epochs during which pledge was not fullfiled.

On other hand, I was always thinking that rewards are automatically claimed by executing a transaction (maybe I am wrong here - does anyone have low level details on how claiming works on UTXO level?) so if they are - then re-registering a pool should claim them as that is going to execute transaction (but only if you have 1 owner wallet).

if u want to be 100% sure then claim/withdraw the rewards and then increase the pledge
But rewards are already stacked to the pool automatically so, I am 99% sure it will work

I will just test it on testnet, but it will take about a month for this experiment to finish… I would still like to know how “withdrawing of rewards” works on UTXO level, when you click that button in yoroi (I don’t even have yoroi), what does it execute on cardano-node blockchain level? does it perform UTXO on your own address for both sender and receiver with reward as extra balance? or what exactly?

ok I found how the withdrawing works on low level - from that it actually looks like you have to withdraw the reward if you want it to be counted as pledge: Guide: How to build a Cardano Stake Pool - CoinCashew

It’s literally transferring the ADA from stake address to payment address, I believe only balance of this address that you can see balance of using cardano-cli query utxo --address is counted as valid pledge.

But we won’t know for sure until my test is over, or until someone who knows the internals better confirms that.

“withdrawing of rewards” works on UTXO level, when you click that button in yoroi (I don’t even have yoroi), what do

As long your balance in the wallet met the pledge (or vice-versa) should not be any problems but of course test it.

the rewards can be claim following the bellow guide

Yes, you should see on pooltool.io the green mark and if you will keep the mouse on that mark you will see the message, pledge met…

And that result will be the same as how the blockchain will see it? In other words, if I get a false positive from a site like that, I may not know if it’s really not met.

tools like pooltool are synced with the blockchain… if it’s telling you in pooltool that is ok it is, if not it isn’t

you are welcome, anytime!

@Alexd1985 Where did you get the screenshot you posted above? When I go to pooltool.io, I don’t see the stats listed like that for my pool. I do see the green checkmark by the pledge amount listed horizontally, but I don’t see a vertical list of the stats like in your screenshot. I also don’t see a list like that in the pooltool iOS app.

what is your ticker? it’s from pooltool.io