Myself and a developer are currently working on an independent, community built Cardano block explorer. We’d like to push the envelope here and really rethink the roll of a chain explorer in the context of ecosystem growth and adoption. (i.e. not just a tool for computer geeks to check the hashrate)

We’re looking to work with a front end designer or developer who have an interest in shaping this product and growing the ecosystem by building quality tools. If you’d like to help, get in touch.

12 Likes
ADA balance showing in wallet, but not on block explorer
Will ADA Whales Ever Give Up Their Power?
regsanman 27 January 2018 04:08 #2

A suggestion for a feature that I have, is to allow people to set up alerts for addresses they wish to watch. If a deposit or withdrawal occurs on such an address an alert notification is triggered. If it is possible to do this without exposing the person’s identity, ie. email or phone #, even better. Good luck. Sounds like a worthwhile project.

@regsanman That is one of the first ideas on the list. Notifications via email and web hooks. With web hooks and a service like Zapier / IFTTT, you could send a transaction detail notification to a Google Sheet, your CRM, as a Tweet, to a Slack channel or anything else they are connected to.

One debate we’ve been having is to make a user account as anonymous as possible. On one hand we could completely randomize you like done at Coinhodler.io . Your account is only preserved if you save the 12 word back up phrase. Sadly I think most still may have a hard time with this. We are leaning toward user / password with email only used if you want notifications.

Here’s some progress. We got the first Cardano rich list done over the weekend: 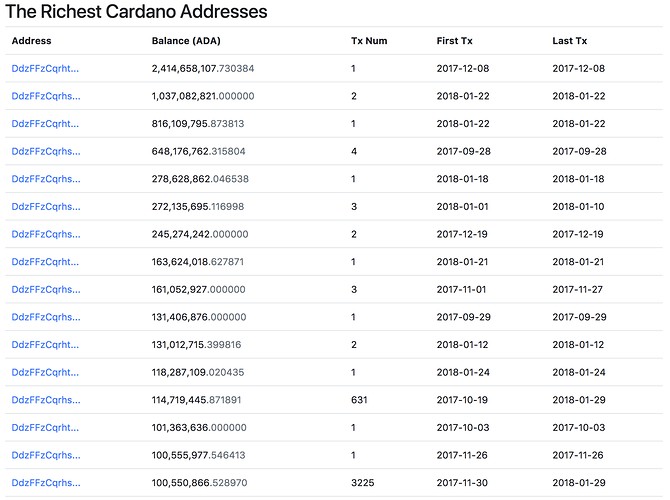 Watchlists are now working. You will be able to label any address and while logged in, and see the label, rather than long address. We’ve found a bit of the “technical debt” Charles talked about, so notifications should 1-2 second range for now.

Yet to do: public API, additional stats and a fresh front end look.

We’re looking for a frontend / UI /UX person to help us rethink what a next generation block explorer should look and act like. If you’re up for the challenge and want to leave your mark on the project get in touch.

Can’t help you because I’m not a very good designer myself.
What I wondered after having watched the sidechains whiteboard video: How chain-explorers can work in the future if there are multiple parallel epochs and even “private” sidechains?
Fully “centralized” blockchains like Bitcoin are perfect to scan, watch and explore them. (“centralized” is meant by having one and only one growing and growing database every full node in universm must run)

But what must an explorer project do and ensure to have insights into the entire Cardano ecosystem? Trying to discover all new sidechains and/or parallel epochs and automatically set up a full node for them, as long as it remains active? Offer a registration interface for private sidechains?

Mr Zindros sidechain video (https://www.youtube.com/watch?v=04D2BP33YI8) explains that transactions between sidechains always ensure that there is no invalid creation of value or double spends. So far so good. This means that a certain sidechain can simply end/die when all his values were transferred to other chains. This brings up the question if such transaction history can simply be lost or if an explorer project has to try to collect and keep this data for research purposes.

Maybe I miss-understood parts of the sidechain project, or the explorer sites want simply to x-ray the main Cardano chain. Anyway, I believe to have good experience in giving feedback about usability and intuitivity.
And the aliased triggers seems like being very easy to use API when it comes to thinking about: how to connect, automatize and confirm incoming crypto-payments in an existing application. The missing thing - but Cardano’s platform seems to offer solutions for it - is some additional metadata like an Order-ID allowing to assign this transaction to a certain purchase.

We’re looking for a frontend / UI /UX person to help us rethink what a next generation block explorer should look and act like. If you’re up for the challenge and want to leave your mark on the project get in touch.

Quick update, we’ve finished notifications on adatracker.com and so we are releasing the site to get some feedback and let interested users play with it. More features and improvements to come, but the wallet address tracking is ready and represents some functionality not yet publicly available.

Just spent a few minutes playing with this, good work!

Something caught my eye on the rich list: the third biggest holder, starting at the end of November, now has just under 1B ADA, or 3.4% of the total, in 8342 transactions, which works out at over 100 per day.

So it has to be somebody with extremely deep pockets picking up as much as they can without affecting the price. (There’s just one other address with transaction numbers in three digits, 798, which started mid-October, about three entries have two digits, and all the rest one each.)

It’s probably futile to speculate, but difficult not to…

@RobJF The third largest holder is the Binance account. So an extreme amount of transactions are expected. What is interesting is that there is some nice growth, but traded ADA by Binance and Bittrex represents a very small amount of the overall pie.

Charts!
We’ve released some charts showing some Epoch based calculations. Epochs are a nice, Cardano specific way to look at the state of the network as they represent about 6 days worth of time. At this time we’re in the 29th Epoch since launch of mainnet. Each Epoch is 26k blocks / slots and so each data point here represents totals calculated over 26k slots.

Transactions - Total number of transactions in each 26k block Epoch. So far blocks have been around 0-3 transactions, with the largest so far being 18 transactions in a single block.
Size - The sum of MB in each of the Epochs, with 31 MB being the largest.
ADA Sent - The sum amount of ADA moved around the network in each Epoch. Keep in mind a 1,000,000 ADA wallet moving 10 ADA will register as movement of 1million ADA due to address rollover.
Fees - Represents the sum of transaction fees collected in each Epoch, some part of which will be paid out to slot leaders.

Have a look at: https://adatracker.com/charts 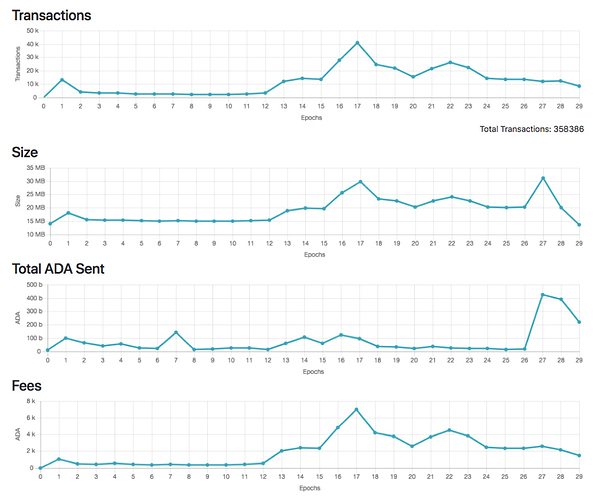 @lovelacepool I really appreciate the work you’re doing here. Regarding anonymous account functionality: I don’t think you should waste time on that feature. If users really want anonymity, it’s not difficult for them to use an anonymous email address from Proton Mail or other similar secure email services. You could simply add that to your FAQ and then let them choose the level of anonymity they want that way.

IMHO, your time and resources should be spent on creating features that add unique value, which you’re already doing. Great work!

Thanks @ADALove Appreciate the suggestion, and that’s the same conclusion @minibikini and I came to. You may give the site your email to get address notification updates, but if you want to remain anonymous - give a burner email. And by design, you don’t need to give an email to create a watchlist account.

Hi @lovelacepool, love the features you have implemented already. Is it possible to add a feature that would display the current blockchain size? Maybe after light client support, a metric that shows the sharded blockchain size.

Thank you for creating this project.

Great suggestion, @Bullishdong - should be be no problem to add. Any other useful stats just let us know.

We have a few more things we want to do before a full announcement, so get your suggestions in.

Added new tags to let people know roughly where in the Cardano ecosystem and address stands as far as holdings. You’ll now see tags on addresses to know if it’s in the top10, top50 thru to the top10000.

I would be happy to help with this if you want to add me to the repository - though the next 3 weeks are crazy so wouldn’t be until mid April.

Thanks again for putting this together!

Much appreciated. Just some background on the charts/epochs page - we thought the 6 day time period of the epoch made for a great way to get a view of the overall network status / usage over it’s lifespan.

Projecting sounds like an appropriate idea, and I agree that the chart starting at 0 an the Epoch start doesn’t quite give the right picture. I’ll get with @minibikini who is the dev and discuss these ideas with him.

Any other thoughts on what a modern block explorer should be … happy to hear them.