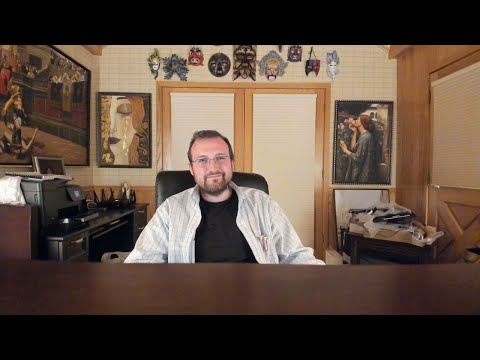 GREAT!! If this guy were a politician he got my votes…his motives are pure and good. i also want ADA reaches high levels (ATH?) in the next years, the purpose of the project is even more important than that: a better world! Let’s hope after the release off Shelley there will be lots off dapps and initiatives using the platform Cardano.

GREAT!! If this guy were a politician he got my votes…his motives are pure and good. i also want ADA reaches high levels (ATH?) in the next years, the purpose of the project is even more important than that: a better world! Let’s hope after the release off Shelley there will be lots off dapps and initiatives using the platform Cardano

Reach ATH, by the speculations i.e. marketcap (false illusion) or by adoption i.e. using by millions especially in Africa? It’s a long way to go, imo at least 3 to 5 more years.

Why do I say long way to get there by adaption?

If it’s mobile, then how? Using by a centralized 3rd party service? Like Yoroi like wallet, then what’s the point of decentralization? Is mobile penetration adequate there?
Do we have decentralised solution for non-full nodes (i.e. SPV like wallets)? Hydra is an option though, but I do not think it will happen by the end of 21, yes I said 21 and not 20.

So, I cannot see that happen soon, as we do not have at least one tool of using it, but that’s ok and I hope that Cardano can catch the train for the ride, but we should not talk abt adoption till 22, which is the earliest I think for seeing some sings of the adoption.

Why? I think, cos

And, I am not pessimistic, even if these all above sound in that way, but a bit realistic and a kind of optimistic (for its success).

So, do not even dream about it until we have a very simple reference mobile app based on Hydra that also contains at least some client components of Goguen (like sending a pre-compiled or a 3rd party created smart contract to the network) for using it.

So, pls be realistic.

I think adoption, like decentralization, is not binary but rather an analog scale. You are right that there is much work to be done, and this is what excites me and motivates me every day. The incremental steps forward are leading to the future that we all envision. I’m glad there are pragmatic and thoughtful individuals like yourself, @_ilap, that are focused on these solutions as well.

If I could just interpret this post into laymen terms…(damn)

I have lately made a plea for a Call to Action that this conversation completely compliments,
@_ilap I look forward to you stepping into an expert role where you are willing to debate on the future of the protocol and are willing to publicly accept vote delegates to support your vote.

Please consider it and I hope you will look to gather other supporters in the future.

Thnx @_ilap for your reaction. Speaking for myself i see the great perspective on the longer range and think at the years 2026-2028, not in the first 2 years. I hodl for the future, but am also curious at the price reaction after shelley, goguen.

Imo, price after Shelley will increase, as staking will attract speculators (i.e free money for staking, trading etc. so, greediness will be the main driver) and some of the pool operators need to liquidate (get some cash) some of their holdings too. I.e. staking will pump around 1.4bn ADA into the system yearly, some of them be hold and some of them will be liquidated. So, probably, it will have affect on the price in addition to the current market dynamics (current forces impact prices).

Also, keep in mind that all cryptocurrencies are attached to the Bitcoin price in a negative sense, e.g. when BTC price goes down almost all alt's one goes down, when its price goes up the alt's price do not really want to go up in the pace as BTC’s does. And consequence is, BTC is currently at around ~50% of its ATH, while ADA is only at 4%.

For Goguen, I am not sure, as the contracts need to be used to speed up the velocity of ADA (i.e. you need ADA for contracts means demand will increase by its popularity for usage).
Anyway, we will see, as I cannot find my crystal ball to tell the exact future.

i feel like making a video about this. yes i think that upward price movements will be there - BUT - most of it is already priced in and will not see exponential growth most expect.

the btc halving (happening tomorrow) will largely adversely affect prices. that paired with expectations of shelley will be met the same way anticipation for the iohk summit last year was. which is to say excitement priced in followed by disappointment when expectations are unmet. once they realise shelley doesn’t mean (on par with eth) smart contracts or dev migration from eth etc.

then once goguen happens hopefully before year end, that won’t happen as people expect as the iele k framework compiler efforts (for now as far i know) have been abandoned.

_ilap
Your post seems to make some assumptions that ignore a significant amount of information as well as the planned rollout strategy as repeatedly articulated by Charles Hoskin in numerous videos. These strategies will have a significant effect on adoption. Consider the following: