VIDEO: Charles explains the story of Vasil node 1.35.3 and how we got here

Charles just released a video explain the story of Vasil Node from 1.35.0 all the way to 1.35.3, what was tested, what was released, timelines and what is going on with Vasil upgrade at the moment. Good 10 minute video dispelling some FUD

And here is the – in my opinion very nuanced – video that at least partly triggered that:

I this video Charles talks specifically about Twitter/ Reddit and crypto media in relation to sensationalizing this event into something it isn’t.

@HeptaSean I don’t think he is accusing anyone, just asking all those involved to use dedicated channels to have such discussions.

just asking all those involved to use dedicated channels to have such discussions.

On the one hand, part of the problem was that these dedicated channels spectacularly failed in this thing.
On the other hand, it is very ironic that he uses the very same channels in the very same way he is urging other people to not use in that way.

Putting his old feuds from Ethereum days, where I honestly don’t know what the truth is, and the usual crypto hate in the same conversation as the valid concerns after three bugs already slipped through their “months of thorough testing” is also something that does not sit well with me regarding that second video.

after three bugs already slipped through their “months of thorough testing” is also something that does not sit well with me regarding that second video.

First video claims that no bugs slipped trough, that’s why version 1.35.3 exists. All the bugs were found by test net before SPOs replicated them by upgrading to 1.35.2 on mainnet (even thou that release wasn’t cleared yet). This is why ‘stuff’ was removed from 1.35.3 and it was tested and ran well on the test net before they announced it as official release.

Unfortunately history of ingrained tribalism does hurt Cardano (as well as other crypto currencies). Pretending it’s not there and that it’s not affecting Cardano now would also be a dishonest discourse (as far as I can see it). I do hope that CF (or whatever they turn into) builds a better channels of communication among SPO/DEV/Contractors. Information flow seems to be such a challenge for CF for some reason.

Since you mentioned them by name I’m going to post clips of their comments. I don’t want people to think they were spreading FUD. They are both AWESOME

members of Cardano community that are responsible for advancing adoption of Cardano, creating some of the most successful projects and teaching thousands of devs and users about Cardano. Just for the record.
Andrew: 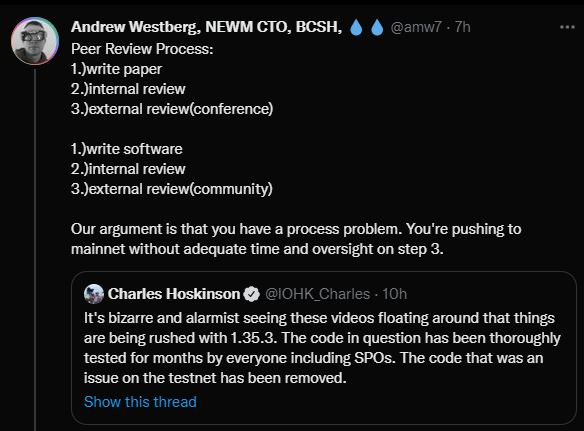 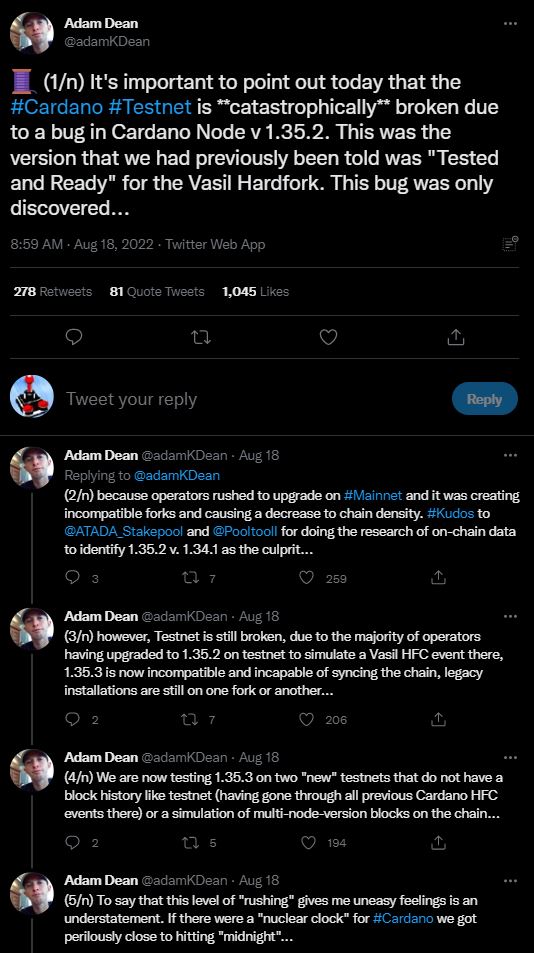 Both Andrew and Adam are developers, not PR specialists.
Is their request for an adequate public testnet with block history and mixed node versions, etc. reasonable? Definitely yes.
Did they anticipate the video would create so much attention and bad headlines/publicity ? I don’t think so.
Should we blame them? Absolutely not.