Happy New Year! We hope you had a wonderful holiday break and are now ready to start the new year with us. As the holiday season comes to a close, we are excited to present to you the first bi-weekly Community Digest of 2023.

Reports about blockchain developer activity can be useful for understanding trends in the blockchain industry and for identifying the most active and influential projects in the space. Sentiments report track a variety of metrics, such as the number of developers working on a particular blockchain, the frequency of code commits and updates, and the volume of discussions taking place within a project’s development community. By examining these and other metrics, it is possible to get a sense of the overall health and direction of a blockchain project, as well as its potential for growth and adoption.

2022 was a bumpy year. What if we could see blockchain protocols who increased development activity despite all crazy dumps? Easy!Here is a

Cardano has again shown its consistency in the past year at the number 1 position in developer activities.

The Norwegian Iagon team plans to bring its project on the Cardano Blockchain. In August 2022, there was an unfortunate delay in moving the previous ERC20 tokens because the bridge used to do so had to be stopped as a result of a cyber attack. No ERC20-IAG tokens could be converted since then. Now the IAGON team has worked out an alternative way so that the move to Cardano can be completed as planned. 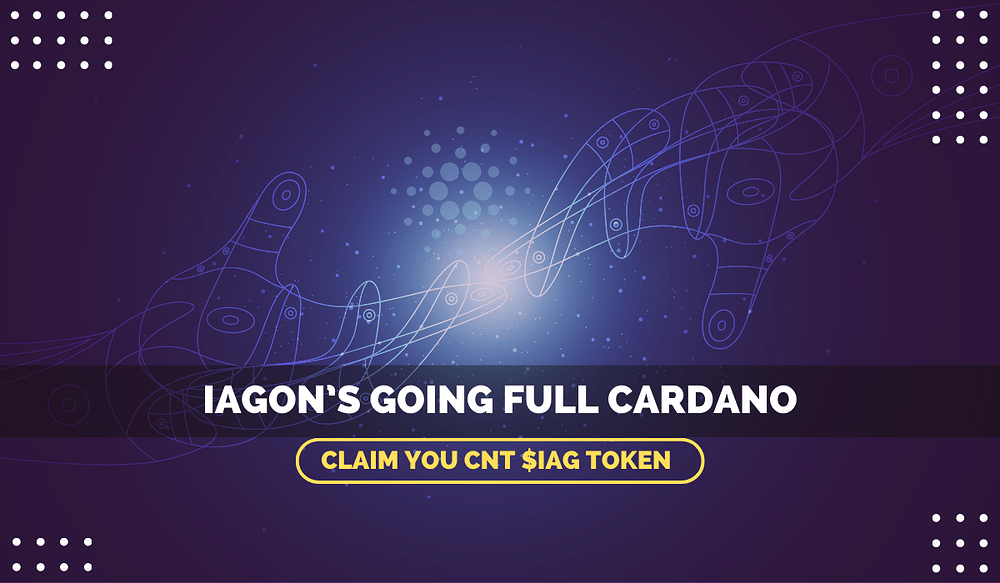 We’re more motivated to move all our operations to Cardano than ever before.

If you’re wondering why you received some ada on December 31, 2022, and from whom, don’t worry. It wasn’t a late Christmas present from Charles, but rather an ISPO, specifically Axo (formerly known as Maladex), refunding its delegators the ada rewards generated by their delegated stake.

This means that every delegator of the Maladex pools will have received an ada refund for the time they delegated to the stake pools, including the relative percentage of the minpool fee. This move surprised many, but the Axo team explained why it was necessary in an article: “The decision not to use these funds was taken given the regulator’s unclear guidance regarding the treatment of income generated from stake pools, and Axo’s commitment to approaching regulatory compliance proactively.”

The Cardano Foundation has submitted a response to a public consultation conducted by the Financial Stability Board (FSB), an international body that monitors and makes recommendations about the global financial system and its regulation. The consultation invited comments on the FSB’s proposed regulatory framework and recommendations for stablecoins, as well as crypto-asset activities and markets.

The Cardano Foundation’s submission, along with all other responses to the consultation, is available on the FSB’s website. In its submission, the Foundation emphasized the need for a nuanced approach to regulatory policy that considers the potential applications of blockchain technology beyond financial or finance-like activities and differentiates between activities that concern the technology itself versus those that build on top of it.

The FSB intends to finalize its recommendations by July 2023 and incorporate public comments. The Cardano Foundation hopes to contribute to the development of an open, sound, and innovation-friendly global regulatory framework for blockchain technology. 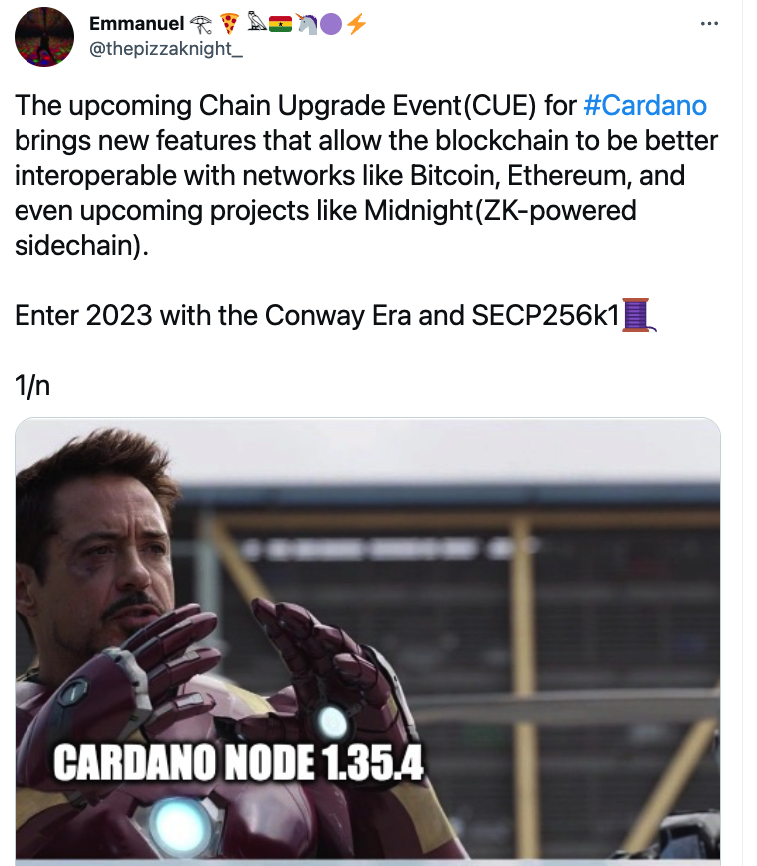 Another Cardano Hardfork Combinator (HFC) event is rapidly approaching, scheduled for February or early March 2023. This highly anticipated event will bring a host of new features and updates to the Cardano blockchain, with a focus on increasing interoperability with other networks. In preparation for this Network Upgrade, our community member Emmanuel has created a high-level Twitter thread outlining several features that is expected to enhance the Cardano Network further.

The IOG team prepares Cardano to enter the Voltaire era. If the topic of on-chain governance interests you, you should definitely not overlook CIP-1694. This Cardano Improvement Proposal (CIP) defines foundations for decentralized decision-making. This will be the first major step towards decentralised management of the Cardano project which will hand over a significant amount of power to the community.

A governance transaction contains special parameters that describe the details of the required action. These actions concern the modification of Cardano protocol parameters and the movement of ADA coins from the project treasury and reserve.

If the governance transaction is signed with the required number of keys, it will be executed on an epoch boundary. This means that the action is enacted.

One of the important Cardano parameters is the major version of the protocol. Governance transactions initiate a hard fork, i.e. an upgrade of the Cardano protocol. Changing Cardano protocol parameters (for example, the K parameter) does not require major protocol changes and can be initialized at virtually any time.

A hard fork is a special case since if a migration to a new version is to be approved, pool operators and users must install a new version of the client beforehand. The upgrade must also be supported by exchanges, third-party teams building wallets, etc. The hard fork combinator can only be triggered if all relevant parties are ready for it.

Changing a parameter related to a major protocol version is therefore considered a special action in both the old and the new governance model.

Entering the Voltaire era will address some of the shortcomings of the current model. The current model is decentralized, but only 3 entities can participate in the voting. ADA holders cannot vote. Although the team discusses protocol parameter changes with pool operators and the community, only the 3 founding entities have control over the process. Furthermore, there is no document or guidance that defines what principles the decision-making should be based on.

A document called Constitution will be created to define the core values and guiding principles for the governance of the Cardano project. At some later stage, it is possible that part of the document will take the form of a smart contract. In the initial phase, it will be only an off-chain document whose hash will be stored on-chain in the Cardano ledger.

There will be a Constitutional Committee made up of members or entities that will have responsibility for overseeing governance. All governance actions must be in accordance with the Constitution.

It is important to say that the Constitutional Committee will not have any special powers compared to the other actors. The other actors (DReps) can replace the Constitutional Committee members at any time and must approve all governance actions. It can be said that the committee has very similar rights as the other members. One of the reasons for the existence of the committee is to solve the bootstrapping problem. The Commission may act as a mentor or advisor.

The Constitutional Committee may be in one of the following states:

Delegation Representative (DRep) is a position that is open to all ADA holders through registration. DRep registration will mimic the existing stake delegation mechanisms (via certificates). Owners of staking keys (essentially stakers) will be able to delegate their stakes to DReps. If someone does not want to actively participate in the governance but is interested in having someone experienced make decisions on his behalf, he can delegate his stake to the chosen DRep to strengthen his position. It is the same principle as delegating ADA to a pool.

It is worth noting that SPOs can become DReps. There is no reason to prevent them from doing so. However, DReps do not have to be SPOs. This allows anyone to gain a strong position through stake delegation without having to run their own pool.

In the initial phase, there will be 6 governance actions. A governance action is an on-chain event that will be triggered by a special transaction with a defined deadline after which it cannot be enacted.

Governance action is considered ratified once it receives a sufficient number of YES votes in its favour. If it does not receive the required number of votes, it is considered expired. If an action is ratified, it will be enacted once it has been activated on the network. An action can be dropped even if it has been ratified if the committee goes into a “no-confidence” state.

Let’s take a look at the list of events:

Any ADA holder may submit a governance action if they provide the required ADA deposit. The deposit will be returned after the vote regardless of the outcome.

Governance actions can be ratified through on-chain voting. Depending on the type of action, different ratification requirements are required. An action will become ratified if some specific combination of the following occurs:

In the case of a Constitutional Committee vote, the required number of members as defined by the quorum must vote YES for the approval of the change. In the case of DReps or SPOs votes, the stake controlled by those who vote YES must meet a certain threshold over the total registered voting stake.

The first governance action, the motion of “no-confidence”, is not voted on by the Constitutional Committee but only by DReps and SPOs. Most actions must be approved by the committee, DReps and SPOs. See CIP-1694 for more information.

Voting will be done through on-chain transactions, which must contain, among other things, the governance action ID (each action will have its own ID), role (committee member, DRep or SPO) and vote (YES/NO/ABSTAIN).

Votes can be cast multiple times for each governance action. Correctly submitted votes override any older votes for a given action.

We highly recommend you find CIP-1694 on GitHub to read the original. You can comment on the CIP and suggest changes.

As we enter the Voltaire era, ADA coins in the treasury, the change in protocol parameters and even the hard-fork will be decided by the community and not by the founding members of Cardano. This is an important step for decentralized project management.

Block production is decentralised at the moment. Once the current 7 governance keys become obsolete, the community will take control of Cardano. This is important from a regulatory perspective, as there will no longer be entities that have control over the management of the project. The IOG may be involved in modifying the source code, but the initiation of the hard fork, i.e. the deployment of the upgrade, will be in the hands of the community. The community will be responsible for Cardano. If regulators wanted to accomplish anything, they would have to communicate with all ADA holders. 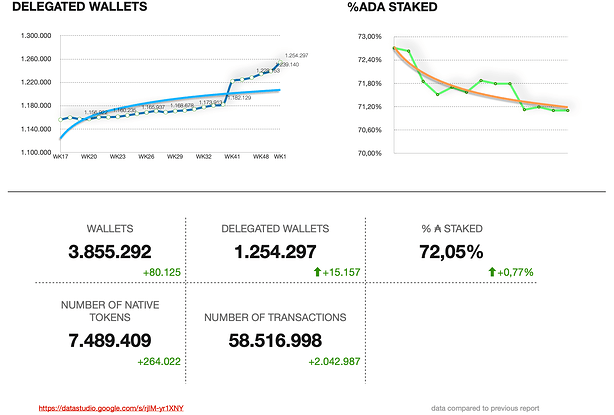 Thanks @ccgarant
We’ll look into this and see if the data can be provided.
Some information depends on other parties, but its worth looking into.